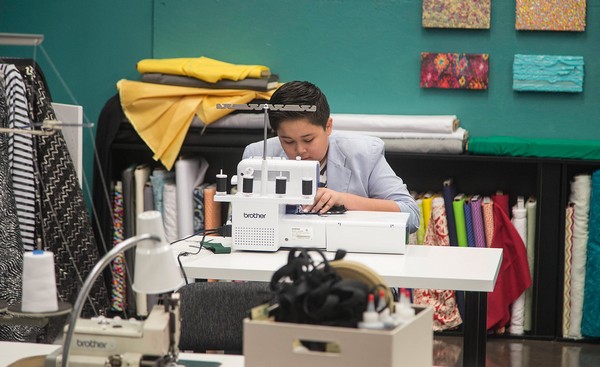 Tonight on Lifetime Project Runway Threads continues with an all new Thursday November 6, season 1 episode 3 called, “The Ultimate Accessory.” On tonight’s episode three young clothiers face off in a competition that tests not only their skills but their relationship with their adult assistants.

For those of you unfamiliar with the show, it is about skilled teen and tween fashion designers who showcase their gift for style.

On the last episode, three teen fashion designers had to create designs worthy of runways around the world in just one day. Aliyah was praised for her business savvy and unique style. Her Paris look, which was all white and red, was critiqued for being too matchy-matchy. Grace was the winner of the challenge, receiving $25,000 and a fashion spread in Seventeen magazine. Did you watch the last episode? If you missed it, we have a full and detailed recap right here for you.

On tonight’s episode as per Lifetime’s synopsis, three young designers test their talent and skills in a competition.

Tonight’s episode is going to be another drama packed one, which you won’t want to miss. So be sure to tune in for our live coverage of Lifetime′s Project Runway: Threads season 1 episode 3 at 10PM EST! While you wait for our recap, hit the comments and let us know how excited you are about this new episode of Project Runway: Threads tonight.

Each young designer has to pick a statement piece and base a look on it.   Zachary, the winner of the show your style challenge, chooses a horned headpiece, Colette chooses a vintage blue Chanel handbag, and Emily chooses a brightly colored clutch.

The contestants find out they need to make a second look using fabric paint, which doesn’t need to be cohesive with their first look but will be shown and judged. Emily and Zachary wait before starting their second dress, while Colette has her mother work on her painted dress while she works on her main look.

The contestants are now told they will be taking their hands off their designs and instructing their parents for the next 30 minutes. Emily is surprised her father is able to add the enclosure for her dress with only her instruction.

Zachary and his mother start to panic as they realize they’re running out of time. With hours before the runway competition, his second look isn’t done. Emily contemplates a last minute addition to her look. Colette and her mother are working on her second look.

The models arrive for the fitting with 30 minutes left until the runway competition.
Zachary’s looks turned out well in the last minute despite his time issues. Colette is also pleasantly surprised by how well her looks turned out.

Emily’s first look is a black dress with a plunging neckline.  Emily’s painted dress features negative painted words around the word “hope,” which represents turning the negative into a positive. Emily has had self esteem problems in the past which inspired the concept.

The judges are impressed by Emily’s first look, which is more daring and has more of a wow factor than her show your style challenge look.

Colette’s looks also impress the judges, but she is criticized for focusing too much on a vintage, mod look at 15. The dress she made to accompany the vintage Chanel bag impresses Christian Siriano in particular, who calls the dress a perfect backdrop and says he is ready to hire Colette right away.

Zachary’s complicated corset on his first look blows the judges away. However, his second look isn’t as impressive.

Zachary is declared the winner of the competition. As one of the prizes, one of his looks will be featured in Seventeen magazine.