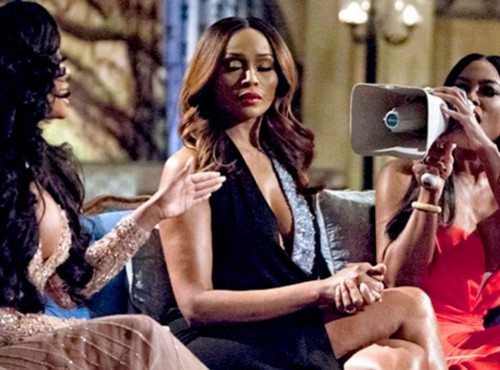 Based on various snippets and videos released from the reunion special for The Real Housewives of Atlanta, we’ve been able to deduce that something obviously triggered Kenya Moore‘s brawl with Porsha Williams. You know, the one where Porsha tried to beat the crap out of Kenya?

Granted, the situation was manipulated by the producers, and the show’s ratings benefited greatly from the fight. However, we finally learned the full reason behind Porsha’s attack after watching Bravo’s broadcast of the reunion special on Sunday night.

Their fight initially starts with a battle of words, with both Kenya and Porsha insulting each other with varying degrees of success. However, it quickly heats up when Kenya starts in on Porsha’s relationship with her ex-husband, Kordell Stewart. Kenya refers to Kordall as the guy that Porsha cheated on, with Porsha replying, “Cheated on? Please! Girl, really?”

As if she can’t comprehend the depths to which Kenya would sink, Porsha then turns to host Andy Cohen and asks him, “What did she say, now?” Cohen, not giving a crap about what’s going on [or perhaps secretly enjoying the drama], replies, “She just said that you cheated on Kordell.”

It’s obvious that Porsha’s starting to get very, very worked up, and she turns to Kenya and tells her, “Listen, you are not going to keep on talking about my character like you know what you’re talking about.” Her threat definitely belied her the anger and outrage shimmering beneath the surface, and it soon exploded when she yelled to Kenya, “I’m going to f*ck you up!”

And the rest, as they say, is history. Porsha attacked Kenya as soon as she got up, pulling her hair and throwing her to the ground. She got in a few good punches before security managed to pull them apart, but not before the brawl went down in Real Housewives and reality television history.