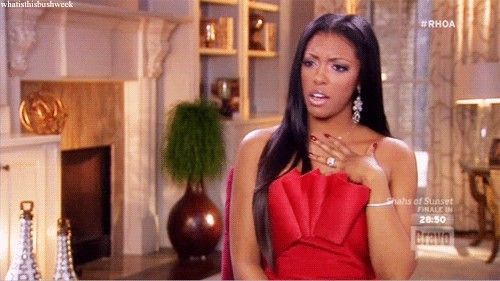 We already know that Kenya Moore and Porsha Williams (Stewart) participated in an all-out brawl during the Real Housewives of Atlanta reunion special, and we know that to some extent, it was manipulated by the producers of the show. But for the first time ever we’re also getting a look at their crazy cat fight.

Bravo has released several sneak peaks from the special, showing exactly what went down during the fight. First, Porsha hits out at Kenya for bringing a megaphone and some other props [including sex toys] to the reunion, but Kenya replies, “I will not have you talk over me!”

However, their fight progresses quickly, and before you know it, they’re hurtling insults at each other. Porsha calls Kenya a ‘slut from the 90s‘ and Kenya replies, “Shut up, you do not have the right to talk.” However, the pent up jealousy and rage from Porsha explodes as she throws Kenya’s props to the ground. She then gets close to Kenya and tells her, “I’m going to f*** you up!”

Obviously, we know what happened next, with Porsha thumping on Kenya and beating the crap out of her. Porsha’s skinny, sure, but that girl in a rage is a terrifying thing to behold. There was no holding her back when she got into that mood, and poor Kenya was left to take the brunt of the hits. Although security guards immediately tried to break up the fight, Porsha got several hits in before they were broken apart. Kenya, on the other hand, was lucky that the fight didn’t go any longer because she was already a bruised mess at that point.

It’s amazing, especially because it seems like Kenya didn’t really instigate Porsha all that much. In fact, Porsha was the one who started it – and really, it’s obvious that it was just all her feelings of anger and jealousy that were bubbling on the surface, and she needed any excuse from Kenya to release them.