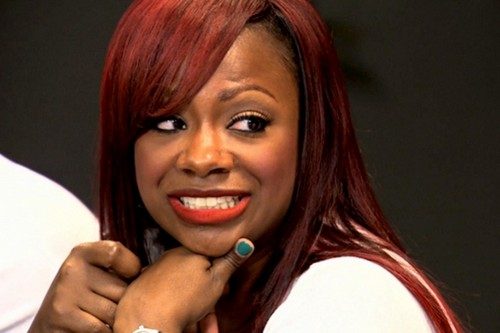 Why did Cynthia Bailey‘s sister, Malorie, try to attack The Real Housewives of Atlanta Kandi Burruss‘s fiancee? According to Media Takeout, “it all starts when Peter tries to TURN UP on Kandi and Todd. Todd stands his ground and actually PUSHES Peter’s OLD AZZ. Then Cynthia’s SISTER Malorie jumps in and attacks Todd. That’s when Kandi BLACKS OUT . . . to protect her man”. Now, Malorie isn’t part of the show or its regular stupid arguments they appear to have on the daily. So she probably didn’t understand the benefits of sitting down and shutting up.  This may be my personal feeling coming through but I truly think people shouldn’t run to join a fight. Especially not Malorie. That woman hardly likes Peter and unless you’re being assaulted then no woman should attempt to fight a man for any reason. It’s all keeping your hands to yourself and spoiler alert – it works both ways!

The whole situation came about soon after the Apollo and Kenya’s Assistant fight and the remaining adults in the room should have been smarter than to stir up more dust. Odds are Malorie probably didn’t even know what the fight was about but she did know how much Kandi was facing with Todd. Well we’ll see how that will end tonight because here’s another fun fact: No one should try stepping up to Kandi. She’s not one of those women that’s all talk. Kandi will defend herself and her relationships to the death and if the audience could see that then so should have Peter!

Though, and I’m only saying this to be fair, Kandi was bound to snap one of these days and of course it was going to be because of her fiancee Todd Tucker. Since the beginning, many have seen their relationship as one-sided. He appeared to be living off her money and some have come right out and called him an opportunist. Such as Kandi’s mother, Mama Joyce! Joyce has been working on her daughter all season long to call off the upcoming wedding and the only reason Joyce hasn’t experienced the brunt of Joyce’s temper is because Kandi will never insult her mother no matter how much of an interfering instigator she may be.

But Kandi couldn’t hold on to her temper for everyone! Not for a stranger anyway. And that’s why it would have been wise if these people would have let their baggage go for once rather than trying to making themselves interesting in front of the cameras. If  all they wanted was more screen time then why couldn’t they have waited till the reunion? The actual show is saved for people like Kenya Moore. That brand of crazy is what actually sells!