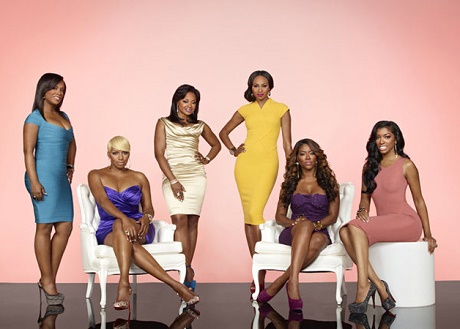 The season 7 premiere of The Real Housewives of Atlanta is just weeks away, which means the cast members are already cooking up some drama to stir up some publicity for the show. It’s a tried and tested formula at this point, and what better way to stir the pot than with some cheating rumors? Most of the RHOA cast members have accused Phaedra Parks of cheating on her recently incarcerated husband, Apollo Nida, a charge that Phaedra vehemently denies.

Cynthia Bailey, in particular, was vocal with her accusations against Phaedra, claiming that she had hooked up with a ‘mystery African man named Chocolate.’ Well, that’s very specific, isn’t it? This claim was floated by in a preview clip from the Real Housewives of Atlanta’s seventh season, but Phaedra’s rep, Steve Honig, said, “Phaedra has been a completely faithful wife. She doesn’t know any men named Chocolate.” He then jokingly added, “I did hear she had her eyes on a guy named Pistachio but it didn’t work out because he was nuts.”

Har har, so funny. Except even Apollo Nida believes that his wife is cheating on him, even as he begins to fight his eight-year prison sentence. In some other preview clips released from trailers and footage from season 7, Apollo can be heard telling a friend, “She’s having an affair with some guy.”

See, Apollo Nida believes that Phaedra Parks is cheating on him, although what he expects after he’s been sentenced to eight years in jail, I don’t even know. I don’t even blame Phaedra Parks for cheating on her hubby, considering he committed fraud and will be in JAIL for the next few years. Of course, Phaedra could just as easily divorce Apollo, but she won’t do that right now – RHOA producers need SOME drama, and this is providing them with a lot of juicy footage for next season.

What do you think about the Phaedra Parks cheating rumors?