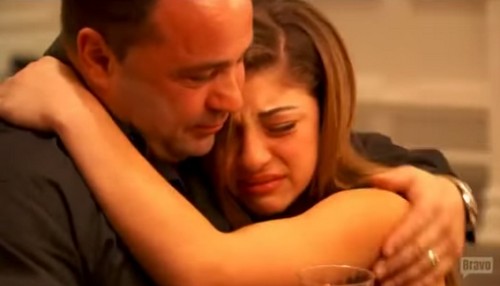 If you have been a fan of The Real Housewives of New Jersey over the last few seasons then you’re well aware of the battle between sisters-in-law Teresa Giudice and Melissa Gorga. Long story short, Teresa seems to resent Melissa for marrying her brother, Joe Gorga and she has had a target on her back ever since swapping those vows. Teresa has used her time on RHONJ to do everything in her power to make Melissa look bad (strippergate anyone?) and it all but ruined the family- until last summer. That’s when Teresa and her always douchey husband, Joe Giudice were charged with a whole slew of federal financial crimes. Once things got as serious as a heart attack the Gorga’s decided to publicly support their jail bird family members.

According to the June 23rd print edition of Life & Style Magazine Melissa is totally in Teresa’s corner now and all of the issues that they once had amount to nothing in the grand scheme of things. Teresa could be facing 27 months in jail and her sentencing is in early July so Melissa knows that this is exactly the point in time when- in order to look good- she should throw all sorts of family support behind her former enemy. That doesn’t mean that Melissa is feeling all that bad for her though!

Sources say that after all of the public embarrassment that Teresa has caused for Melissa over the last few years a part of her can’t help but think that this is a nice dose of karma headed back to her sister-in-law. While she may publicly support Teresa that doesn’t mean that she doesn’t believe that she’s about to get exactly what she deserves. Teresa and Joe built an entire lifestyle off of defrauding people and in Melissa’s mind, this is what happens when you do that.

What do you guys think- is Melissa secretly kind of glad that Teresa’s scheming caught up with her?