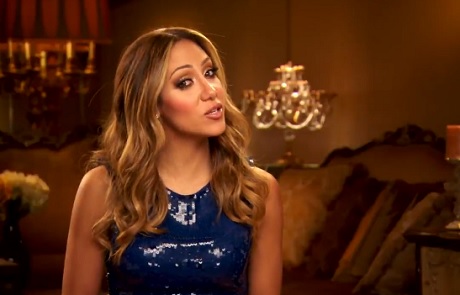 Real Housewives of New Jersey spoilers have teased for weeks now that Jacqueline Laurita would be returning to the Bravo reality TV series. RHONJ’s ratings have been slipping, despite Teresa Giudice’s high-profile court case and the producers’ decision to bring back alum Dina Manzo, those two storylines were expected to help the series’ ratings but seemed to be doing the exact opposite.  We speculated for weeks that Laurita would be returning, and now an all new RHONJ spoiler video finally confirms it.

In the RHONJ spoiler video, Teresa Giudice is shown leaving the court house and the troubled housewife confesses that she and her family are going through hard times, but she is confident that her family will “get through it.” Giudice reads a heartfelt text message she received from Jacqueline Laurita offering her support during the trial, and reminding Teresa that she is the “strongest women she knows.”  In the Real Housewives promo video, Laurita says, “If Teresa called me tomorrow and says ‘I need you,’ I would be there in two seconds and she knows that.”

Jacqueline Laurita won’t just be appearing on Real Housewives as a shoulder to cry on, her family drama will also be front and center during the upcoming season.  In the RHONJ spoiler video, Jacqueline and her husband share a conversation regarding their finances.  Her husband proclaims that if it comes down to paying his mortgage payment or getting their young autistic son the help he needs, he obviously is going to choose to help his son over paying his mortgage.

Cast member Dina Manzo is reportedly furious that Bravo decided to bring Jacqueline Laurita back, the only reason she signed on to return to the show was because she thought Jacqueline was no longer a part of it.  Manzo is apparently refusing to film scenes with Jacqueline, so surely more drama will ensue.  Will you be tuning in to the next season of Real Housewives of New Jersey?  Are you happy that Bravo decided to bring Laurita back, do you think she will help the sinking show’s ratings?  Let us know what you think in the comments below.