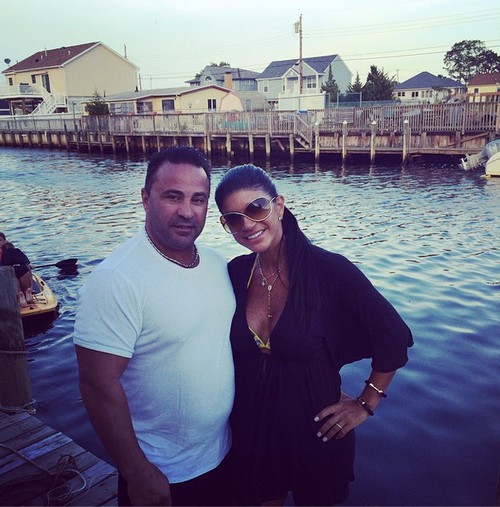 Teresa Giudice‘s days on The Real Housewives of New Jersey are numbered, she is going to be fired. Teresa’s court sentencing is on September 23rd, but until then, Teresa’s been trying her best to kiss Bravo’s ass to stay on the show. But she’s seriously delusional if she thinks that any TV network will keep a convicted felon on their payroll.

We’ve been hearing whispers of Teresa getting fired for a long time, even before her sentencing was a done deal. Her behavior on the show has already raised several eyebrows over the past few months, and her refusal to participate in promoting the show or following Bravo’s instructions have already put her on the chopping block. Plus, Bravo’s already lined up a convenient replacement for Teresa in Dina Manzo, who is all ready to take Teresa’s spot in the lineup.

Recent reports have also suggested that Teresa thinks that she’ll somehow stay out of jail because she’s the mother of four girls. Um… I’m not even sure what to say to that. Apparently, Teresa doesn’t believe that the judge or jury will convict her and send her to prison because they’ll feel sorry for her.

Uh, if the jury and judge worked on pity, there’d be very few criminals in prison. It’s not like Teresa engaged in some light shoplifting that’s easily forgiven by the court systems – she and her husband, Joe Giudice, actually engaged in tax fraud! There’s no way Teresa’s getting out of this one scot-free, and at the same time, she can kiss her place in the Real Housewives franchise goodbye.

Even if she somehow gets a very short prison sentence, there’s no way the show’s going to take her back after she comes out of jail. Yes, it might be a good ratings ploy, but no TV network will ever take the risk of alienating audiences by re-hiring convicts – not when there are other housewives who have their fair share of drama without a criminal background.