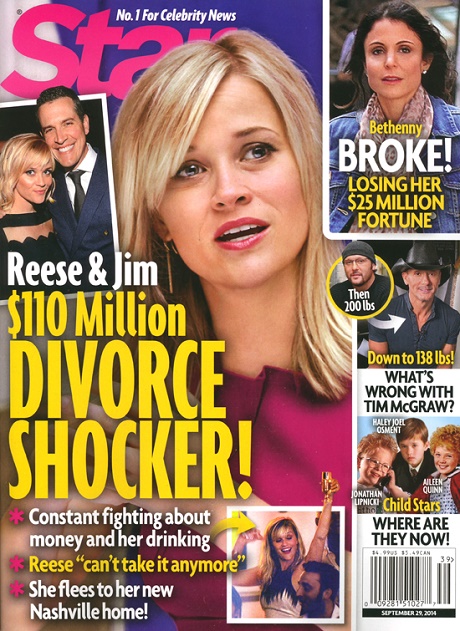 Reese Witherspoon and her husband Jim Toth have [wisely] laid low since their arrest scandal last year, and Reese has managed to spin a lot of goodwill out of her recent performances in Wild and The Good Lie, both of which premiered at the Toronto International Film Festival. However, the new cover story from Star Magazine reports that Reese and Jim have secretly been fighting over the past few months, supposedly over money issues and Reese Witherspoon drinking nonstop.

Star’s source explains, “Reese and Jim’s relationship is definitely not in the best shape. They’ve been arguing constantly and spending a lot of time apart. It’s almost like they’re living separate lives. No one would be surprised if they announced a separation or divorce.”

Eh, do you announce a separation and divorce when your relationship is 50% based on business, 50% on personal reasons? When Reese married Jim, it wasn’t just for romance and love, trust me. It was also because he was a power player at CAA, and even though he doesn’t technically represent her [conflict of interests and all that], his influence has helped her rehabilitate both her career and public image. Not many stars could have bounced back from those drinking and arrest shenanigans like she did, especially with little damage to her career. If anything, she’s in a better position now than she’s ever been.

But of course, that doesn’t mean that Reese and Jim aren’t fighting, just that they’re unlikely to divorce. Even though Star claims that they’re both headed for a very specific $110 million divorce, there’s more to the part where Reese supposedly bought a house in Nashville to ‘escape’ her husband – except that both Jim and Reese bought that house together. Ruh-roh.

Star also has a feature on Bethenny Frankel losing all her money, and Tim McGraw losing all his weight. Seriously, the guy looks like he’s starving and malnourished, and it’s clear that he’s lost at least half his body weight – at least, from the pictures that Star has provided. Stress over his marriage, or something more serious?