Rihanna Pregnant: Who Is Her Baby Daddy With Baby Number One? 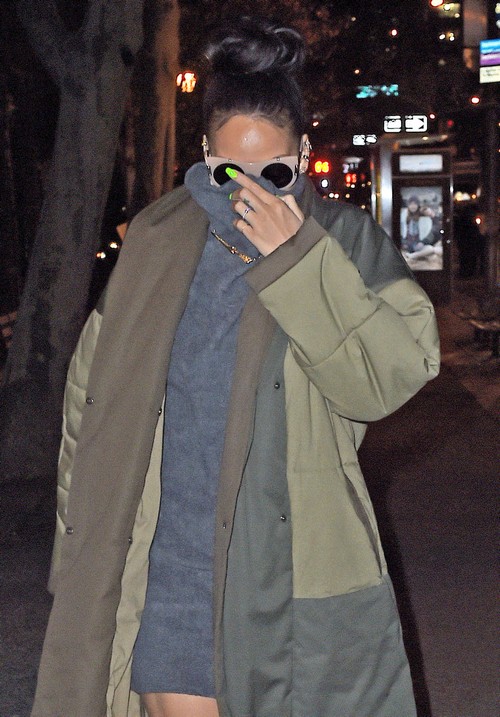 Is singer Rihanna pregnant and rocking a baby bump? Well, according to a new report – Rihanna is currently working on a song about the “baby growing inside her” and plans to debut it on her next album as a pregnancy announcement, and of course a sales boost. It’s just silly to waste a perfectly good pregnancy announcement and not make a dime off from it, right?

Media Take Out is reporting that they spoke to more than one source, and the verdict is in…Rihanna is definitely pregnant. The site goes on to explain that Rihanna has banned smoking weed from her recording studio, which is major if you know anything about Rihanna, and she is currently laying down a new track about her pregnancy.

Now, the obvious question on everyone’s mind – who is Rihanna’s baby daddy? We’re going to go out on a limb here and guess that it is not Chris Brown. The popular theory on social media is that it may be rapper Drake, Rihanna was romantically linked to him earlier this year. The singer was also spotted out on dates with Cliff Dixon this summer, they alleged met through mutual friend and rapper Big Sean.

So, what do you think about 26 year old singer Rihanna being pregnant with her first baby? Do you think she’ll make a good mom, or are you already worried about the little bun in her over? More importantly, who is Rihanna’s baby-daddy? Chris Brown? Drake? A secret boyfriend we never knew existed? Let us know what you think in the comments below!

Rihanna hiding a baby bump in NYC Dec 4 by FameFlynet