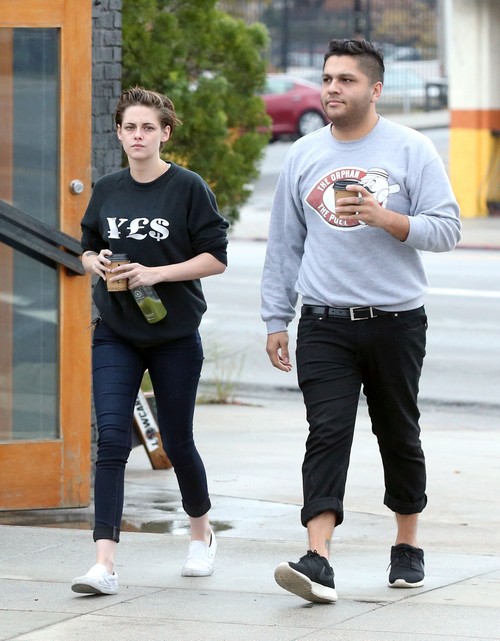 Sources report that Robert Pattinson and FKA Twigs could be discreetly engaged and planning to elope for a secret marriage. Needless to say, Kristen Stewart is distraught! FKA Twigs has held Robert Pattinson’s hand, had her ass grabbed by him, cuddled with him, partied with him, and done everything possible to get noticed – all in a discreet manner, of course. Call the paparazzi? Puh-lease, FKA Twigs would never. FKA Twigs is insulted by all of your claims that she’s just using Robert Pattinson. I mean, it’s just a coincidence that when she started dating Rob, her career immediately took a turn for the better. It’s also a coincidence that right after she and Rob went public, FKA Twigs started landing Rolling Stones features and Telegraph interviews, and her concerts started selling out. It’s all a coincidence, guys. Kristen Stewart knows that FKA is using Rob and she isn’t pleased.

This next bit will also be a coincidence if it happens. According to our sources, Rob and FKA are getting serious and are possibly engaged – or rather, Rob is getting serious and FKA is seeing dolla dolla bills. That means that not only do they spend all their free time together – as do all couples at that age – but they’re even discussing getting engaged and marriage as a possibility. In fact, our sources tell us that FKA Twigs has suggested elopement as a possibility, meaning that if we hear about Robert Pattinson and FKA Twigs getting married ‘in secret’ in Bora Bora, we’ll know who’s fault that is.

Honestly speaking, I don’t think either Rob or FKA is in a marriage state of mind right now. But FKA Twigs would probably love to elope, if only because it increases her media bump that much more. At this point, there’s not too much more she could do to increase her place in the spotlight, but an elopement will certainly do the trick, no? A Robert Pattinson and FKA Twigs engagement would make headlines all over the world, not just in Hollywood. Could it could also drive Kristen Stewart to do something desperate, like get a boyfriend… or a girlfriend?

Twilight star Kristen Stewart makes a morning coffee run with a male friend in Los Feliz, California on December 16, 2014. Since her ex Robert Pattinson reportedly bought a new home in the Hollywood Hills, Kristen is rumored to be moving to a loft in downtown LA to avoid potentially running into him and his new girlfriend FKA Twigs… FameFlynet