Robert Pattinson Breaking Up With FKA Twigs To Date Kristen Stewart Again, Thanks To Jennifer Lawrence? 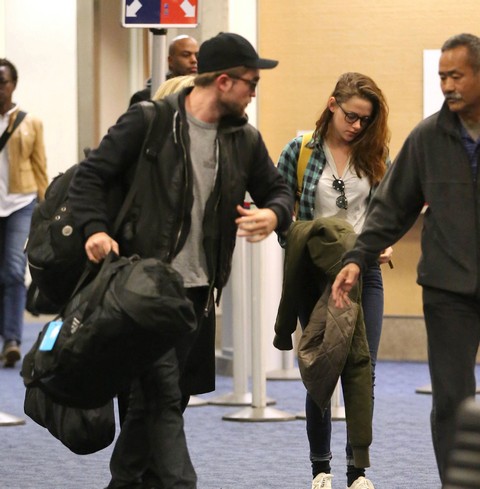 Now that Kristen Stewart is losing Nicholas Hoult back to Jennifer Lawrence, Robert Pattinson is breaking up with FKA Twigs so he can date his Twilight KStew again. Jennifer Lawrence and Chris Martin have broken up, which is good news for more people than Gwyneth Paltrow. See, since the Jennifer Lawrence/Chris Martin breakup, the chances of Jennifer reuniting with ex-boyfriend Nicholas Hoult have increased exponentially. That means that Kristen Stewart and Nicholas Hoult have a much slimmer chance of starting a torrid romance, which also means that #RobstenUnbroken has a possibility of coming true. A very, very slim and almost negligible possibility, but a possibility nonetheless.

I still say that people [cough, Twi-hards, cough] sustaining their hope on a Robsten reunion are erring on this side of delusional, but hey, to each their own. The pure fact of the matter is that Robert Pattinson is still dating FKA Twigs, even if Kristen’s burgeoning romance with Nick comes to a sudden halt. However, at least this will just be a twisted love triangle, instead of a twisted love rhombus.

For Kristen Stewart and Robert Pattinson to get date again and be back together now, a LOT of things would to have to happen, not least of which that they have to actually be interested in dating and getting back together. Then, Rob would have to break up with FKA, and Kristen would have to cut off any romantic ties with Nick – which would also only happen in the wake of a Nicholas Hoult/Jennifer Lawrence reunion. Then, Robert Pattinson and Kristen Stewart would have to consult with their teams and manage their publicity before getting back together, since you know it would cause a media explosion if they were even spotted in the same place at the same time. In the end, both of them have worked very, very hard to shake off their Twilight images, and are trying to move on. Would they throw away all that hard work, even if they wanted to get back together and COULD get back together? I doubt it, don’t you?

Robert Pattinson and Kristen Stewart in the Twilight days: FameFlynet