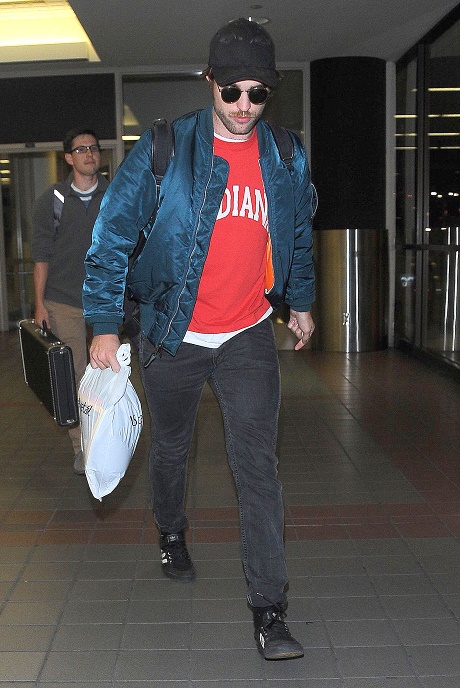 FKA Twigs hasn’t been the best influence on Robert Pattinson, whether it’s concerning his partying or his career. Instead of focusing on landing new jobs, Rob has been following FKA Twigs around the country, accompanying her to all her concerts, parties, and events. Not only that, but Rob’s also been living the rocker lifestyle, which might not be the best thing for someone with a previous reputation of dabbling in.. um, extracurricular substances.

Now, we’ve reported in the past that Rob’s friends have been saying over and over again that he’s become way too serious about FKA Twigs way too quickly. The guy dated Kristen Stewart for three years but never showed this kind of devotion, dedication, or freedom in showing PDA. But with FKA? It’s holding hands, ALL THE TIME. Not only that, but he doesn’t even care that he’s basically become a glorified PR tool in FKA’s global domination plan. Rob knows he’s being used to boost FKA Twigs’ album and concert sales, but he’s so whipped he doesn’t even care.

Now, it’s all well and good if Rob decides that this is a fling and he’s just having fun. However, he’s at that age where marriage and babies are probably starting to enter his thoughts, especially since a lot of his friends have also been getting engaged, getting married, and starting families. Plus, sources have admitted that Rob and FKA are living together full-time and are apparently very serious about each other. Well, of course FKA Twigs is very serious about Rob – it’s all dolla dolla bills, everywhere she looks. Three months ago, people didn’t even know who she was – and now? It’s raining money and PR and publicity and concert sell-outs.

And Rob? Well, he’s been suckered in. His friends might warn him against proposing to FKA Twigs, but a Robert Pattinson and FKA Twigs engagement wouldn’t shock me, in all honesty.