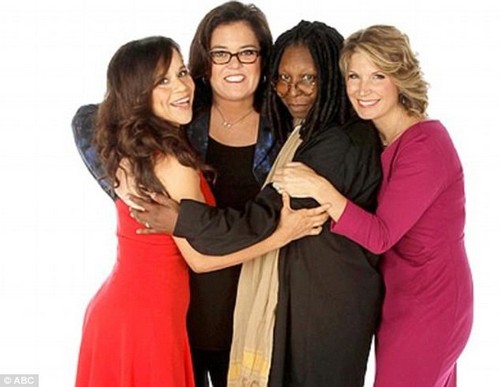 Now, however, the two seem to be uniting as they plead their defense to studio execs that they are not to blame for the decline in ratings. O’Donnell and Goldberg are pointing fingers at Rosie Perez, sources tell Radar Online, claiming her voice is so annoying that viewers are tuning out. While both veterans of the show have told Perez that they want to help her by offering advice and suggestions for how to improve, they only made the offer to upset her in hopes she’d leave.  The two have long been jealous of Perez’s talent and following. In fact, says Radar Online, Perez has actually been the most popular among the new lineup when it comes to connecting with the audience. Perez was reportedly hurt over the offer to help because she felt O’Donnell and Goldberg were giving backhanded comments and only pretending to be nice.

Perez is leaving soon for Broadway where she will star in the play, ‘Fish in the Dark.’ And while some are calling her Broadway stint “a much-needed break,” others are speculating she may use this time off to devise a plan for her exit from the show.  Perez is done with the drama and backstabbing, and knows it won’t end given her co-hosts egos and attitudes.

What do you think of Rosie? Would you be upset if she left the show? Are Rosie O’Donnell and Whoopi Goldberg bullying Rosie Perez into quitting? Tell us below!