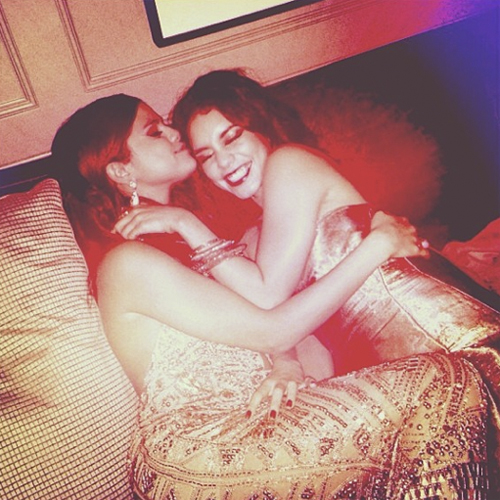 I guess all of those good coping skills that Selena Gomez learned during her all too brief stay at an Arizona rehab facility really didn’t stick. Instead she and bestie, Vanessa Hudgens hit up the Vanity Fair Oscar party and to say that they had a good time would be an understatement. Selena was spotted sipping on a drink all night, either champagne or vodka or gin. She partied her a** off, took a bunch of selfies and by the end of the evening the former Disney princess was toppling out of her heels. RadarOnline claims that sources say Selena was “quite happy” and not slurring “too badly.”

Remember when Selena used to guard her image as if it was the most precious thing that she owned? Back when she didn’t want to do anything to set a bad example to her legion of fans? Obviously in recent months that has gone completely out the window. It’s kind of ironic that when she was running regularly with Justin Bieber she was still thought to be squeaky clean. Now that they’ve split she’s waving her bad girl flag at every opportunity! Here comes Drake… .

Selena’s family and close friends have tried to get her to go back to The Meadows to finish the 45 day treatment program that she bounced out of, but she seems to have other ideas. Do you think that Selena really does have substance abuse issues or is she simply a young woman coming of age in front of a media circus? Tell us your thoughts in the comments below!

The 2014 Vanity Fair Oscar Party held at Sunset Plaza in West Hollywood, California on March 2nd – note that Selena is getting that puffy face commonly associated with alcohol abuse