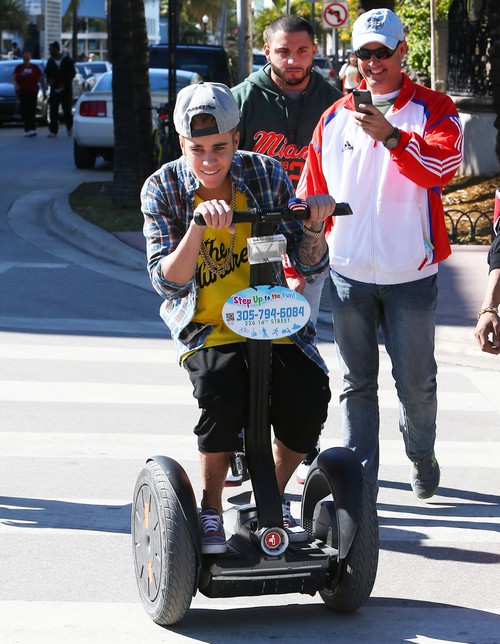 I think Justin Bieber is an idiot for a multitude of reasons and he added a few more to my list on Thursday when he sat for a 4.5 hour deposition. Last June it is alleged that Biebs sent his bodyguard to beat up a Miami photographer and a lawsuit has since been filed. Biebs sat for a multitude of questions yesterday hurled at him by the bodyguard’s attorney and it became quite obvious that Selena Gomez is still his weakest spot.

Biebs refused to answer questions about whether or not Selena was present for any fights with photographers and when pressed he stormed out of the room like a little boy. He finally returned after a few minutes with his attorney but then, as usual, Biebs was a disrespectful jerk to everyone in the room. Aside from acting like a schmuck, he is also foolish. Obviously he wouldn’t want them to subpoena Selena but based on his overblown reaction alone they are now much more likely to want to talk to her.

According to TMZ: The contentious lawyer for the bodyguard drilled Bieber on a variety of subjects, but things spun out of control when Selena Gomez was raised.

The lawyer started asking if Selena was present during any incident involving fights with photogs. Bieber’s lawyer, Howard Weitzman, felt the lawyer was just trying to get a rise so he objected. But the lawyer persisted and asked again … Bieber was fuming and Weitzman jumped in and said his client was being harassed.

The photog’s lawyer asked about Selena again, and at that point Justin and Weitzman stood up and left, and as Justin was leaving he screamed, “Don’t ask me about her, do not ask me about her!”

Five minutes later they returned but things got even hotter. At one point Bieber responded to a question with the word “Yeah.” The lawyer said, “Do you mean yes?” To that Bieber responded, “What the f*** is the difference between yeah and yes?!”

A short time later Bieber fired back, “What is this, “60 Minutes?” At another point he responded to a question by saying to the lawyer, “OK Katie Couric, what’s your question again?”

Maybe Selena wasn’t present for this particular incident but she has been there when other similar stuff has gone down and she knows exactly how Biebs acts. If lawyers catch her on a day when she’s mad at Justin one only knows what information she’ll give up. By having such an emotional reaction to Selena he basically lead them right to her and made it look like a great idea to pull her in for a deposition. If Justin had carried himself better things would have likely gone differently but as it stands now Selena might be subpoenaed to testify against him. Do you think that she will give up damning information or will Selena cover for her former boyfriend? Tell us your thoughts in the comments below!