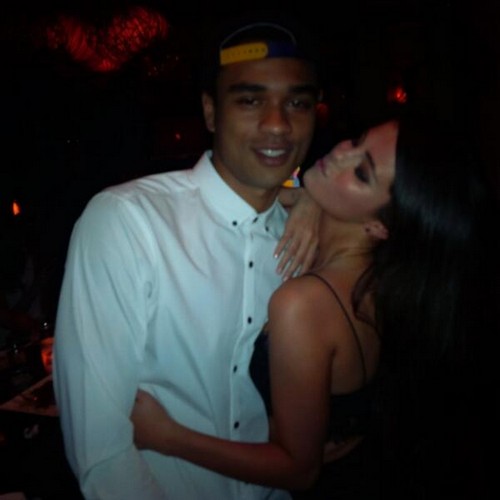 Justin Bieber wants to flirt with models and show them off on Instagram? Well, Selena Gomez is going to one-up him and flirt with models on Twitter. Selena was spotted flirting up a storm with model Tanz Watson on July 10th, and based on Tanz’ tweets and pictures, the duo clearly hit it off. But is Selena flirting with Tanz to make Justin jealous, or is she truly moving on from her ‘toxic’ relationship with the Biebs?

One of the pictures that Tanz posted on his Twitter account was captioned, “Hold up hold up got my homie @selenagomez.” The picture does look awfully cozy for someone who was rumored to be dating Justin Bieber less than two weeks ago. Selena’s making a kissing face at Tanz, and both of them are embracing in a rather intimate way. But then again, Selena could have just been wasted out of her mind, which wouldn’t be that out of the ordinary for her these days.

Besides, Tanz is a much better rebound than Justin’s usual Instagram groupies. He’s an actor with actual credits to his name, unlike Yovanna Ventura‘s ‘modeling’ resume. So in terms of their respective flings, Selena wins this over Justin. But in terms of who’s coming off looking more desperate, Selena takes the cake. Clearly, their relationship is as immature as it ever was, but can we expect any better from a couple that originated in young Hollywood? Both of them are immature, both of them are way too famous for their own good, and both of them don’t know what it’s like to NOT get whatever they want. So when it comes to each other, of course they’ll act like total idiots. Selena wants Justin to feel bad about hooking up with Yovanna, and so she turns to Tanz to make him jealous. Justin wants Selena to feel bad about messing with his head, and so he tries to make her feel bad with his string of hookups. In the end, both of them coming out this situation worse for wear, and the whole cycle will repeat itself.