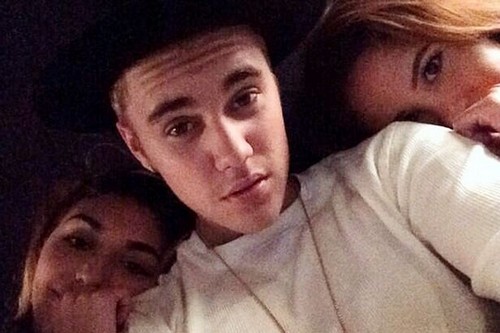 Justin Bieber and Selena Gomez have an infamous on-again/off-again/on-again relationship, and this time doesn’t look to be any different. In fact, it’s becoming pretty clear that Justin never had any intention of staying steady with Selena, even if there were rumors about them buying a house and moving in together.

Over this past weekend, Justin was spotted getting close to his ex-fling, Chantel Jeffries. Chantel posted an Instagram picture showing her and Justin lying in bed together. Previous reports claimed that Justin has insisted that those pictures be uploaded online so that Selena would see them. He’s clearly trying to make Selena jealous, but the real question is why?

The last time we saw them, they were getting drunk and getting high and going to theme parks and house parties. And now, Justin’s already back to flirting with models, while Selena’s probably moping somewhere. It’s a ridiculous relationship, and one that’s perfect for these two. They’re both immature and both lacking in self-control, and despite Selena’s attempts to perfecting her public image, it’s become more and more obvious that she’s a hypocrite. She preaches a clean lifestyle without drugs or alcohol, and she acts like she’s better than Justin. But here she is, playing him every chance she gets, and partying just as much as him on a regular basis.

In the end, she deserves every ounce of drama that comes out of this relationship. Everyone tends to blame Justin for everything that goes wrong in their romance, but we’re starting to feel like it’s Selena who keeps pulling the plug on Justin. In that case, why shouldn’t Justin be with someone who won’t just use him and ditch him whenever she feels like?