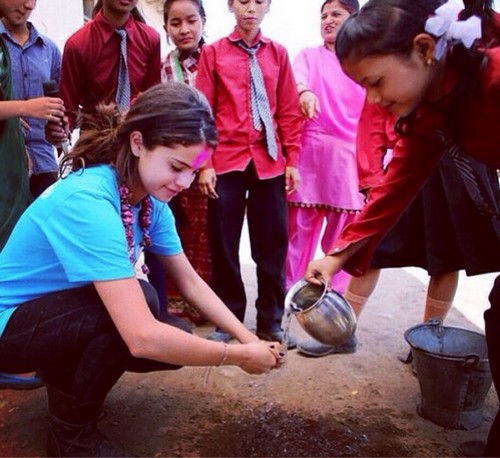 Selena Gomez has learned the hard way recently that aligning herself with the wrong people really hurts. After having a fall out with Taylor Swift, Selena opted to be-friend Kendall and Kylie Jenner, who also run in the same crew as Justin Bieber. It seemed a logical move until Selena found pretty racy texts that were flying between Biebs and Kylie — and she pulled the plug on her connection to everyone in Bieb’s crew.

Within a week or so, Selena reconciled with Taylor and it looked like maybe she had gotten a much needed reality check. Selena even spent a few days earlier this week in Nepal on a mission for UNICEF and, while there, she told the local media that she was searching for mental peace and trying to escape the American media.

Sounds like a great plan for a young woman in serious need of some healing, right? Unfortunately, Selena didn’t return with inner peace, ready to begin a new path. Instead, she headed to London to attend a Katy Perry concert with Niall Horan. On the one hand, seeing her with any guy other than Biebs is a good thing, but not necessarily this guy. Niall has had a thing for Selena for years and it was so obvious at one point that Bieber actually confronted him about it.

Back then Selena was all his and he wasn’t about to let a boy-bander move in on his relationship. Selena knows that Niall is the one guy that got a reaction out of Bieber and that is precisely why she gravitates towards him every few months. If Biebs was once uneasy over Niall, then Selena figures he will still have some sort of reaction to them turning up together.

If nothing else, it proves that Selena still isn’t over Biebs — because if she was then she would stop playing mind games and simply move on. Do you think that Selena’s plan works and that Justin freaks out when he sees photos of her with Niall? Tell us your thoughts in the comments below!