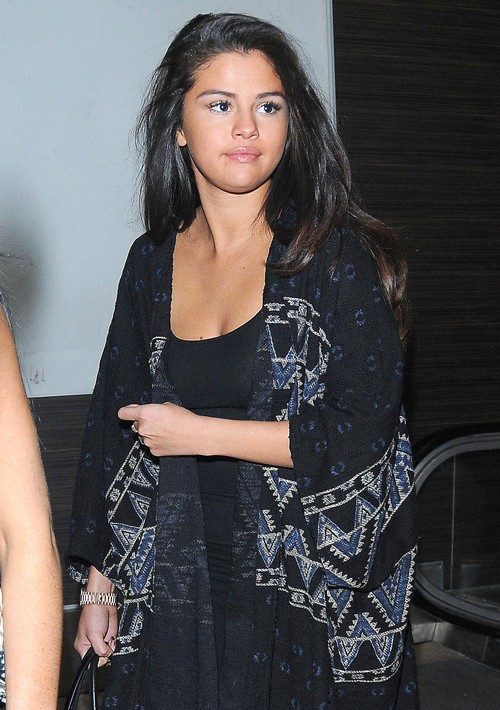 Selena Gomez had photos snapped at LAX looking puffy and bloated after returning from her Christmas trip to Texas with Cara Delevingne where the two visited her family, held hands as they shopped a mall, got grabby with one another, and set tongues wagging that they were more than just friends.

CDLers know, however, that Selena Gomez was hoping to be pictured getting super close to Cara Delevingne to help amp up her sexy bad-girl image that she’s desperately hoping ex Justin Bieber will come running back for. Her idea to put the question mark over her relationship with Cara was not too wise. In hanging with Cara, she is getting into some serious partying again. Cara has been pictured by photogs dropping a bag with a white powder inside not too long ago and is a constant presence on the party scene. Cara has been in a relationship with Michelle Rodriguez, who is a major partier as well. Cara also calls Rihanna one of her best friends, so it doesn’t take a brain surgeon to know that these two weren’t hitting the library on their trip to Texas.

And if the company Selena Gomezis keeping isn’t making it obvious enough, then take a look at her recent pics. Selena’s face appears to be puffy and bloated. Too much partying and drinking, coupled with the fact that the starlet has Lupus is a dangerous combination. Selena spent a couple weeks in rehab at one point, but she cannot truly deal with her own recovery from alcohol and drug addictions until she finally deals with the most forceful addiction she has…to ex boyfriend Justin Bieber. Until Selena moves on from Justin, she won’t be able to become sober.

Everything Selena does revolves around Justin Bieber. Even when the two are off, she still plans everything around him—getting him back, finding out who he’s with, making him jealous, etc. Selena obsessives over him so getting sober will be almost impossible until she gets him out of her life. Selena is self-medicating when she is not with him, and she is in full party mode when she is with him—so nothing will change until he is no longer in her life.

Selena is risking her life by not living the healthy lifestyle she should be living as a person diagnosed with Lupus. It does make us wonder, though…which disease is more deadly for Selena—Lupus or Justin? Tell us what YOU think below.

‘Behaving Badly’ actress Selena Gomez departing on a flight at LAX airport in Los Angeles, California on December 27, 2014. Selena looked like she added some weight while away for Christmas as can be seen by looking at her chubby face. Selena took new gal pal Cara Delevigne home to Texas for Christmas but rumors are swirling that Justin Bieber is trying to win her back by purchasing a private jet so the pair can travel the world in style. FameFlynet