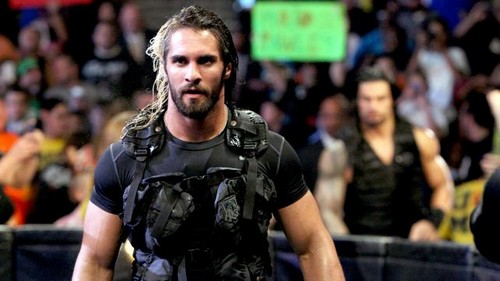 WWE superstar and Money in the Bank winner Seth Rollins is sitting on cloud nine. He has just come out of a white hot program with Dean Ambrose and now sits as the heir apparent to the title…or does he? That uncertainty is at the heart of why Seth is in an odd place right now. With Brock Lesnar the unquestioned man right now, how does Seth fit in? Does he go out and swerve the champ?

What is Seth Rollins’ plan ?

With no clear ideas at the moment, here are some things I would do quickly:

Lose the Batman Gear – While I love the outfit Rollins is wearing in general, I hate the Batman shirt/whatever it is that he wears to the ring sometimes. The pants I get and the boots are awesome, but the shirt with the fake muscles look silly. Rollins is ripped and needs no pseudo muscle. Just leave him shirtless or wear a t-shirt to the ring.

Put Some Temporary Gold Around His Waist – Rollins might be the Money in the Bank winner but he has never really held gold other than the tag belts in WWE. That little detail does hurt despite his Money in the Bank victory. If you want him to be over even more, have him hold the Intercontinental Belt in the interim.

Get Him Away From Dean Ambrose – Dean Ambrose is a superstar and about as over as you can get. That said, he is not the type of wrestler that shows off the best of Rollins. Rollins is an epic in ring performer and needs someone that is a better fit. They tell a great story but they simply brawl in the ring because of it.

Give Him A Showcase Worthy In Ring Opponent – As mentioned, Rollins needs someone to click with. I wish to God that Rey Mysterio was still around in the WWE. I can only imagine the fun it would be watching these two guys go at it. It reminds me of the days when CM Punk was doing the Straight Edge Society and he had that huge program with Rey. That got Punk to another level because it showed his incredible in-ring talents.

Rollins needs that now. Who could provide it? Dolph Ziggler comes to mind right away and he just so happens to hold the Intercontinental belt…Hmmm..

This is an extreme long shot but Heyman could do wonders for Rollins. Imagine a swerve where Lesnar goes through a monstrous fight with Cena at Night of Champions only to have Heyman turn on him for Rollins to cash in! That would never happen but man it would be fun to watch.