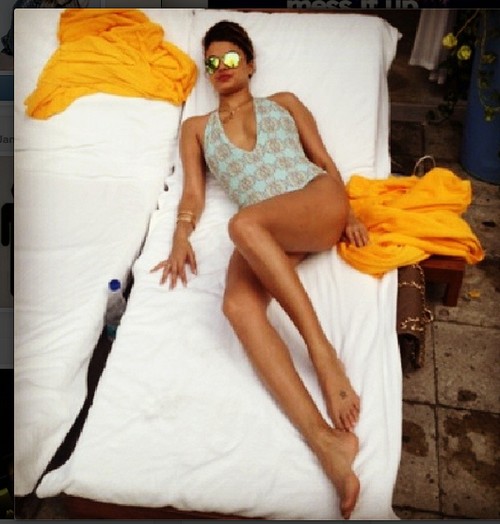 Did you have a bad New Years? Well, nobodies New Years could have been as bad as Shahs Of Sunset star Golnesa “GG” Gharachedaghi. GG boasted on Twitter that she was headed to Miami to lay in the sun and bring in the New Year with her boyfriend Dennis Desantis. All seemed well, until tonight when GG took to Twitter to announce that she is now single, and has kicked Dennis Desantis to the curb. Apparently she found out Desantis “f—-d some other girl.”

Desantis has recently listed himself as a “TV personality” on his Facebook page, so we will most likely get to see the whole messy break-up on the next season of Bravo’s Shahs of Sunset. It is a little ironic that we just watched GG’s previous boyfriend Shaun dump her on Shahs a few weeks ago because she cheated on him. What comes around goes around!

So, what is a girl to do when her boy-friend strays and she has to cut him loose? Well, if you’re GG then you hop on Twitter seconds after you break-up and make plans to hang out with Vanderpump Rules star Jax Taylor (Sur’s hottest bartender). And the award for “Fastest Rebound EVER” goes to …our girl GG! Between Jax’s self-diagnosed addiction to sex and GG’s out-of-control temper, we are in for some intense drama! Who is excited for a Vanderpump Rules and Shahs of Sunset cross-over?