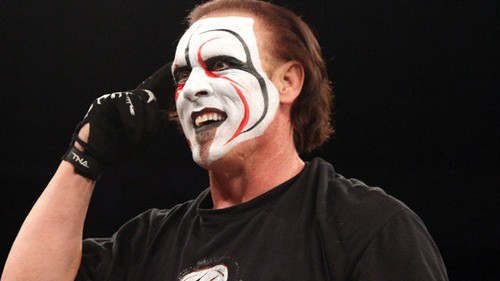 Although it is one of the most common rumors batted around wrestling circles, it appears that Steve “Sting” Borden may finally be appearing on WWE television according to several sources. Sting joining the WWE has been sort of like a pipe dream for wrestling fans over the years as he is the lone major superstar to never take the Vince McMahon bait.

The latest news is based largely on cryptic tweets that Sting has been releasing. He tweeted the date of the next Monday Night Raw, 07.14.14, and then tweeted a really cool picture of his face in what appears to be unique makeup. Wrestling insiders feel fairly certain that Sting will possibly either debut on that show, or show up to tout his appearance for the hot new wrestling video game, WWE2K15.

Either occurrence would be epic for wrestling fans around the world. This man coming to WWE has been one of the most watched for wrestling moments in years. Many think it still may not happen. Despite the cryptic tweets, Sting could be pulling a swerve. He has been known to tease things like this and it not be what anyone thought. If this turns out to be yet another false alarm, WWE fans are likely to sour on ever seeing the man in the WWE.

For me, I grew up watching Sting become the star he is today. Sting was a very raw grappler that learned from the best in Nature Boy Ric Flair and others. He now is a Christian leader and one of the most respected wrestlers in the business. Sting coming to the WWE and debuting in Virginia would be appropriate. He cut his teeth in the Mid-Atlantic area during some of his early years. North Carolina and Virginia is most certainly Sting country.

Personally, I think that Sting will show up on Monday Night Raw to tout the video game and his inclusion in it. This is based on several factors, but the primary one is the timing of the show. Sting debuting on the last show before a PPV like Battleground seems like a waste if they are planning on him debuting as an in-ring talent. Someone like Sting would deserve a PPV like WrestleMania or SummerSlam for a debut explosion.

Of course, that could still be the case. He may show up and start a slow burn feud with some wrestler for a later PPV. SummerSlam is next on the schedule for the WWE in August, so that would make perfect sense. Who Sting would face is another story. The long expected fight between him and Undertaker seems unlikely after the debacle with Brock Lesnar breaking the streak at Wrestlemania 30.

One thing is abundantly clear, however. Sting debuting in any fashion for the WWE would be epic and one of the biggest moments in wrestling history. Don’t miss Monday Night Raw in Virginia on 07/14/14 or you might just miss something epic.