Is AJ Lee Returning to WWE a Good Thing For Paige? 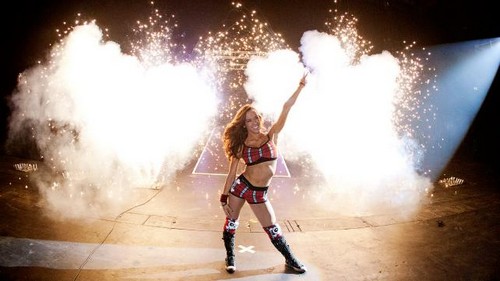 WWE superstar Diva AJ Lee has returned to take her rightful place atop the Divas division and it is just in the nick of time. Up and coming superstar Paige has held the Diva’s Championship since taking it from Lee the night following Wrestlemania 30. The shocking title change led to Lee taking some time off and a dominant reign by the young British superstar.

Now that Lee has come back and taken the belt again, what does it mean for the up and coming Paige? Will she be harmed or helped by this development?

The answer to that question is rather simple…Paige will be vastly elevated by this if the WWE plays their cards right.

The one thing that was keeping Paige from jumping to the next level was a lack of credible competition. She went through small programs with several Divas and all were pretty good. She showed quickly that she was superior to most Divas in the ring. That much was kind of expected as Paige has always been considered a monster between the ropes. She has been wrestling since she was a little girl having been raised in the business.

AJ Lee, however, is a good feud for Paige. She can match her in the ring and she far exceeds her in personality right now. Lee can bring out the emotions and excitement needed to elevate Paige to a new level. All the talent in the world can leave you flat in professional wrestling if you have a lack of personality or can’t tell a story. AJ Lee can tell a story better than any Diva on the roster, in and out of the ring.

Paige has shown flashes of such brilliance. Her work with Alicia Fox nearly helped to catapult a Diva that had struggled for a long time to relevance. Fox went with a new, crazy kind of gig and it worked. Paige was able to put her over in a non-title bout and it instantly gave her new credibility. The fact that she can do that for the Divas already is a tribute to Paige’s abilities at such a young age.

Now, she gets to feud with AJ. With the work she has done already, it is easy to understand why the Divas Universe is getting excited. Not only are AJ Lee and Paige getting more spotlight, so too are the rest of the Divas. That is going to do nothing but improve them all and get them the work they need to become top hands in the division. It is going to be an exciting year and Paige and AJ Lee will be right in the middle of it.