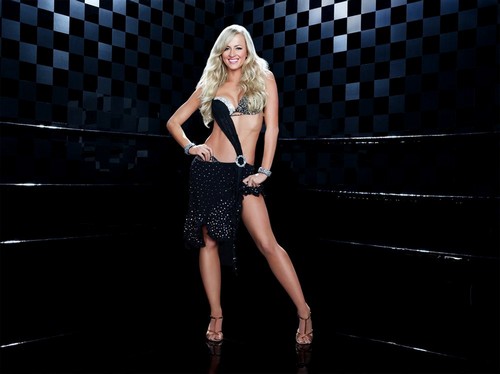 Danielle “Summer Rae” Moinet, the ravishing blonde bombshell seen in WWE rings across the country and on hit reality show, “Total Divas” happens to be a pretty fascinating gal. While her on screen persona came off as brash and shallow, it is quickly apparent that this is simply a part of her wrestling responsibilities. Tough, smart and completely driven for success, Danielle Moinett, Summer’s real name, is not someone that gives up easily. Here are ten facts about her that you might not know:

1. Summer Rae is a slender 5’10” tall and much of that is legs. Her height is one of her calling cards in the ring and she often uses moves that take full advantage of her assets. In fact, the wrestling business usually claims she is 6’1” instead of 5’10” tall. It is anyone’s guess which is most accurate.

2. Rae is the first WWE Diva to land a role in a WWE Studios movie. She will star in a movie titled The Marine 4 in 2015. Alongside the MIz, she will be the original Diva movie star.

3. Summer has spent the majority of her time on the main WWE roster being the dancing diva next to Fandango. Though they recently parted, she has now found another man in “The Showoff” Dolph Ziggler. How deep that relationship goes has yet to be revealed. She also has made great strides in the ring herself.

4. Moinett was a team captain for the Chicago Bliss football team before becoming a wrestler. She was a cornerback and known as one of the best in the LFL.

5. One of Summer’s most prominent feuds has been with Natalya on Total Divas. The two simply do not get along and Summer notoriously slapped her on one episode to elevate the feud to new levels.

7. Summer debuted in NXT as a ring announcer though it did not take long to get her back between the ropes. There she feuded with such stars as Emma, Paige and countless others.

8. Many compare her to former WWE Diva Stacy Keibler thanks to her long and lean legs. Though they favor in this way, Summer Rae is a far better in ring competitor. Both are beautiful and own the best legs the business has ever seen, but Summer is a bonafide in ring star.

9. At a young 30 years old, Summer is defying the odds by getting started a bit later than most Divas. You could never tell by looking at her. She doesn’t look a day past 22.

10. Born in New York, she now resides in Orlando Florida. She is billed in the ring as being from Raleigh, North Carolina.