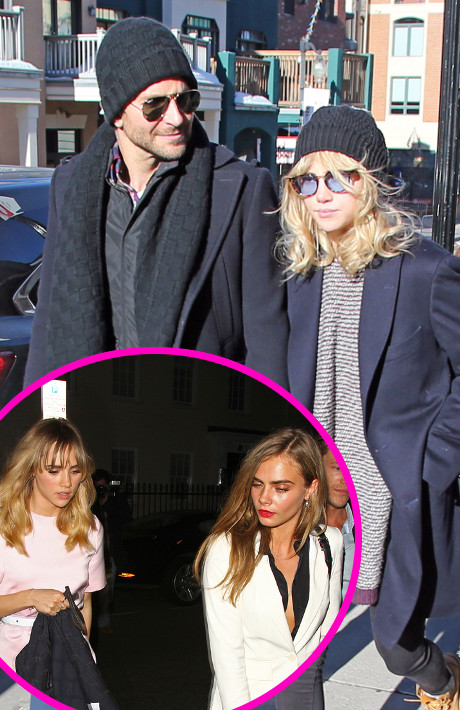 Suki Waterhouse recently dumped Hollywood golden boy Bradley Cooper. She claims it was because she’s too young for the actor, but after being caught out and about with fellow model and notorious bad girl Cara Delvingne, people are starting to wonder if she hasn’t been wrangled back into the world of hardcore partying — something Bradley tried so hard to keep her away from. It’s kind of a heart-breaking situation, really. Bradley, 39, finally thought he’d found the girl of his dreams in the 22-year-old model. Some even thought he might propose to her at the Oscars . . . apparently not.

Suki was photographed in London last week with Cara, who’s currently involved in a relationship with Fast & the Furious actress Michelle Rodriguez. Suki and Cara attended an event with Karl Lagerfeld last week and after that opening concluded, well, the night was just getting started for the two world class models.

Star magazine reports how things escalated between S and B, and ultimately resulted in a one way ticket to Splitsville: “Bradley wants to settle down and start a family,” reveals a close pal, who adds that Suki would rather let loose and focus on her blossoming career. The blonde beauty, 22, made her decision very clear when she was seen partying with fellow model and notorious bad birl Cara Delevigne in London on March 13, “Suki is keeping her distance,” says the source. “She thought it was better to end things now rather than let them drag on.”

What do you think about Cara and Suki’s London romp and Suki’s calling it quits with Bradley? Either way, this reignited friendship between the two models could possibly spell trouble for Cara, as Michelle R doesn’t seem like the warm-fuzzy-sharing type. Are things about to heat up? Should we expect a dangerous love triangle to blossom in the coming months?