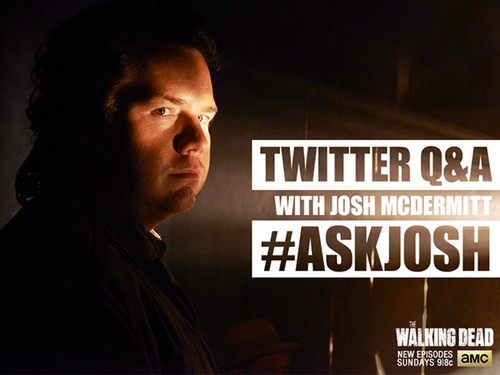 Tonight on AMC Talking Dead returns with an all new Sunday November 9, season 5 episode 5. On tonight’s episode, the “Self Help” episode is discussed. Guests include Michael Cudlitz, Josh McDermitt and Gale Anne Hurd.

Talking Dead features host Chris Hardwick who also hosted Talking Bad. Chris spends time with fans, actors, producers and tv enthusiasts, recapping tonight’s The WalkingDead episode, and taking questions and comments from viewers. Fans may continue to engage with the after-show following the on-air conclusion, online, at AMC.com for more videos, weekly polls and photo galleries of the guests featured on the series.

On the last episode of Talking Dead joining Chris  were Ana Gasteyer best known as a cast member on the sketch comedy series Saturday Night Live, John Barrowman and Emily Kinney who plays Beth in The Walking Dead. Guests discussed the evening’s proceedings and took your questions live. Did you watch the last episode? If you missed it, we have a full and detailed recap right here for you.

Talking Dead airs tonight, at 10 PM ET on AMC after The Walking Dead. While you wait for the recap, Celeb Dirty Laundry offers a live recap of tonight’s The WalkingDead Season 5 Episode 5 “Self Help” right here!

Chris introduces his guests Michael Cudlitz, Josh McDermitt and Gale Anne Hurd. Chris asks them is Eugene expected Abraham to beat him up like a gorilla; Josh says Eugene probably knew this would happen but while confessing he did not think of what would happen. Michael believes without the group Abraham would have killed Eugene, Chris asks why Abraham has left to live for since his family is dead and mission is nothing but a lie. Chris asks Gale why Eugene had to lie, Gale says he’s the type of character who usually keeps everything to himself yet realizes that they would have protected him without being able to save the world and knew the lie was hurting them more.

Chris asks Josh if he is relieved about Eugene confessing, he doesn’t have to go on telling people that he has no idea about it and having to play it off that it won’t be the same as the comics.

Gale says the lie was becoming a threat to their lives, Eugene knew he couldn’t keep risking their lives like at the bus crash. Chris asks about the people in the grocery store, Michael says that the members in the group he was with raped Abraham’s family and that is why he killed them all.

Josh mentions that Eugene is not gifted in his physical powers at all, he is just so slow and really nonathletic. A caller asks Josh why Eugen spit on the walker, Josh says that was pretty much his first kill to save Terram to him it was like spiking a football at the end zone.

Chris is surprised at how much love people are loving Eugene’s mullet on twitter, a fan named Shay came up about how it felt for Michael filming the scene for Eugene getting pummeled tin the face. Josh says he worked with a stunt guy with how to take a punch, Michael says it was so good and really fun to to do it.

Chris asks about sex in the apocalypse and was surprised with how nude Michael was. Josh said it was awesome to creep on and that Michael has a great body, though the scene was right in the comics; Josh likes showing off how Eugen’s creep factor. Chris  asks Gale about how they just went at it with everyone there, she says it’ s kind of how cavemen did it; they just don’t care anymore. Michael says that Abraham has other needs and wants more of it in the show.

Chris asks about that massive ranch of walkers, Michael says that this is something they could never get through but knows that Abraham is choosing to not hear the others; he just can’t stop moving because he wanted to just keep gong. A caller was supposed to cal but they never answered, Chris asks Michael about Abraham’s flaws as a leader; he says he’s a moron and knows that he is stubborn beyond belief. A fan asks if Eugene will get strong in the season, Josh says he hopes so if he lives the beating of course.

Chris asks Josh what gave Eugene the courage to save the group, Josh says that talking with Terra kind of made him realize that he has to start being a hero himself. Chris asks if Abraham would demolish Rick in a fist fight, Michael says he really doesn’t know; they have different skill sets; yet Rick isn’t afraid to eat your neck.

Now we get a sneak peek of next weeks episode, we see Daryl on top of the roof of a building with Carol burning a body wrapped up in white sheets.  Chris asks why they would do that to them; making them wonder who that is.