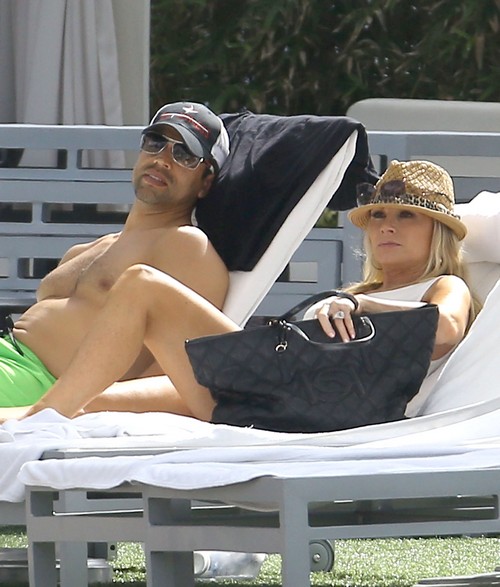 Real Housewives of Orange County is easily the least exciting of the Real Housewives franchise, and rumors are always circulating that RHOC is on the verge of cancellation. Housewife Tamra Barney is really the only member of the show that gets any tabloid exposure, and the media has been reporting for months now that Tamra and her hubby Eddie are getting a divorce. If it wasn’t for never-ending speculation that Tamra and Eddie are on the outs, we would have forgotten about Real Housewives of Orange County all together.

Ironically, the August 18th edition of OK! Magazine is reporting that the rumors about Tamra and Eddie aren’t even true! According to OK!, “The couple’s personal and professional lives are both rousing successes and business is booming at Cut Fitness, the gym they own together.” An insider told OK! that, “There are no problems between them. Tamra has been in the gym every day, and now that everything is running smoothly, she has decided to get back in to real estate.”

During the last Real Housewives of Orange County reunion on Bravo, Eddie didn’t bother showing up, further fueling rumors that he and Tamra had broken up. But, according to OK! Magazine, that wasn’t the case at all. Bravo didn’t even invite Eddie to the reunion because there was no drama to hash out between him and his wife or any of the other cast members.

So, if Eddie and Tamra’s relationship is perfectly fine, and they are not even considering a divorce, then perhaps the rumors about Bravo firing Tamra from RHOOC are true. Anyone who watches the Real Housewives shows will tell you that the housewives who aren’t hot messes and whose personal lives aren’t spiraling out of control, are always fired.

Do you think Tamra is going to get axed because she isn’t getting a divorce? Or, should Bravo just pull the plug on Real Housewives of Orange County all together seeing as how their drama doesn’t hold a candle to the other Real Housewives shows? Let us know what you think in the comments below!