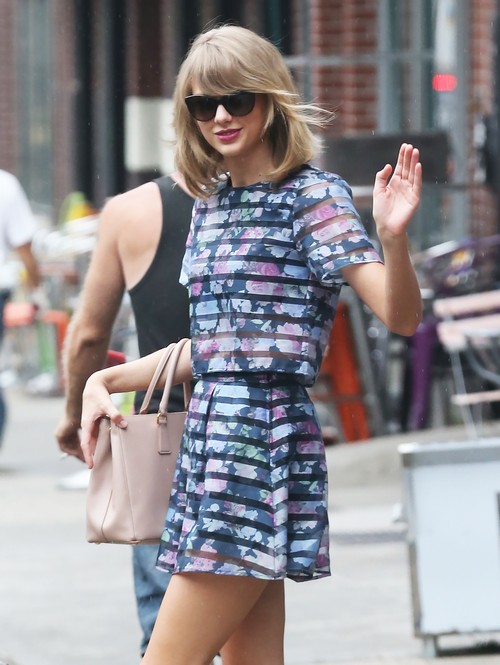 Taylor Swift and Kendall Jenner will never be friends, especially with their shared history of Harry Styles between them. However, one’s a reality star turned ugly model while the other is one of the most successful recording artists in the history of music. Who wins?

In this scenario, definitely, DEFINITELY Taylor. We know Taylor uses her songs to diss her ex-boyfriends and call them out in all the ways she’s imagined they have wronged her. But with her new single Shake It Off, Taylor’s now taken to dissing her ex-boyfriends AND their new girlfriends/ex-girlfriends.

The lyrics are: “My ex man brought his new girlfriend / She’s like, Oh my God, I’m just gonna shake.”

Yeah, this is a total diss. The ‘ex man’ is Harry Styles and his new girlfriend was obviously Kendall Jenner. It would match the timeline since we know Taylor was working on this single last year, after she and Harry broke up and Harry began dating Kendall. I’m  not really sure what the shake part is supposed to refer to, but the ‘oh my god’ is obviously referring to Kendall’s vapid way of speaking.

All in all, A+ on the meangirling, Tay-Tay. Nobody meangirls other celebrities like Taylor Swift, especially since she has an audience of a bajillion teenage girls to listen to her. Plus, her fan base actually overlaps quite a lot with Kendall’s fan base, so let’s hope they shift sides after listening to this song. I don’t advocate blind fangirling of musicians, but better Taylor than that useless attention-seeker Kendall Jenner.

Taylor Swift waves to fans as she leaves the gym after a workout on August 12, 2014 in New York City, New York. Taylor can soon be seen in the new movie ‘The Giver’ based on the best selling book.