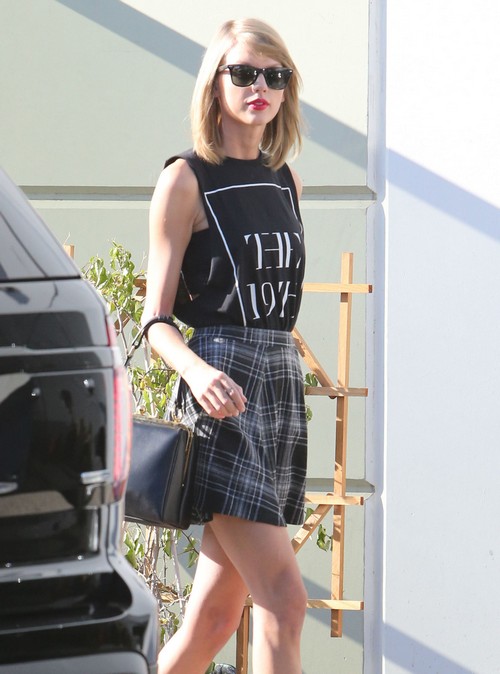 Taylor Swift doesn’t do casual, so when we hear that she and Harry Styles are ‘hanging out’ again, I think we all know what that means, don’t we? ET Online reported that Harry Styles and Taylor Swift were spotted hanging out at the 1975 rock concert on November 19th in Los Angeles. Of course, this is technically the first time that Harry and Taylor have been spotted together since their breakup in 2013, following which Taylor decided to humiliate the poor boy and sing songs about him to the whole world.

A source told ET Online, “I was on the floor and I saw them in what I believe was a VIP section. They were both dressed in black and they were very friendly towards each other. To me they seemed like friends…I’d say somewhere in between.”

Many sites are jumping to conclusions about the ‘casual’ nature of Taylor’s relationship with Harry, but they’re forgetting that once again, Taylor Swift does not do casual relationships. You think she would ever lower herself to just a hookup? Or friends with benefits? Puh-lease. Taylor thinks way too highly of herself to ever do that, so if she and Harry are ‘hanging out’ again, it’s because she’s somehow convinced him that a relationship is mutually beneficial. It doesn’t have to be a romantic thing – remember, this is Hollywood. Anything flies. Maybe Harry Styles is agreeing to date Taylor Swift to distract the public from Zayn Malik’s rumored drug problems, or maybe he’s dating her because he wants to promote their upcoming album. Whatever the reason, Taylor Styles and Harry Styles are dating again and clearly don’t care if people know about it.

What do you think? Is Harry being stupid by taking Taylor back? Or is it good that he gave her another chance? Let us know your thoughts in the comments below.