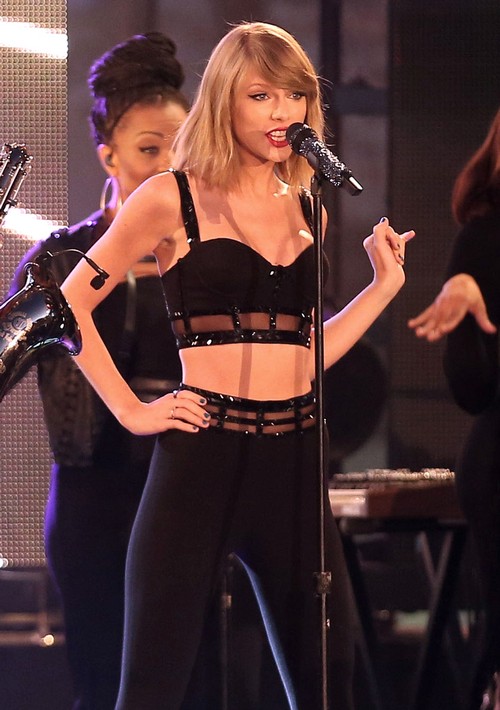 Taylor Swift is promoting her new album ‘1989’ and the former country singer who is now doing pure pop is looking sexy and sharp. Like everyone else, we love a good joke about singer Taylor Swift’s pathetic love life. But, we have to give credit where credit is due. After a long string of failed celebrity relationships and cheesy break-up songs to document them, Taylor Swift has broken her personal record since sky-rocketing to super stardom and has been officially single for 18 whole months!

The November 3rd edition of GLOBE Magazine reveals, “Not so long ago Taylor Swift seemed to have a new boyfriend every week. But, after dating the likes of John Gyllenhaal, John Mayer, Harry Styles, and Connor Kennedy, she’s been single for 18 months. And she’s not bothered in the slightest.” In a recent interview Swift confessed, “I’m too young to get married. Not age-wise, but I know myself, so why try to meet someone right now when I’m too young to do something serious.”

The 24 year old singer has grown up a lot over the past year and a half, as long as you don’t count her totally juvenile feud with fellow singer Katy Perry. Swift appeared to be going through a boy-crazy phase for a while that most young girls experience when they are in middle school, she was just a late bloomer. However, there is a down side to Taylor’s newfound independence. Seeing as how she isn’t breaking up with a different boy every month, she hasn’t been cranking out a lot of her money-making hit break-up songs.

So, what do you think of the new and improved Taylor Swift? Are you as impressed as we were that she managed to make it an entire 18 months without a boyfriend or break-up? Do you think it is hurting or helping her image, since the majority of her songs were based on her failed romances? Let us know what you think in the comments below!

Taylor Swift is spotted at a medical building in Beverly Hills, California with her bodyguard on October 24, 2014 after performing on Jimmy Kimmel. Taylor, who recently revealed that she is terrified of sea urchins, has been busy promoting her new album, ‘1989.’  FameFlynet