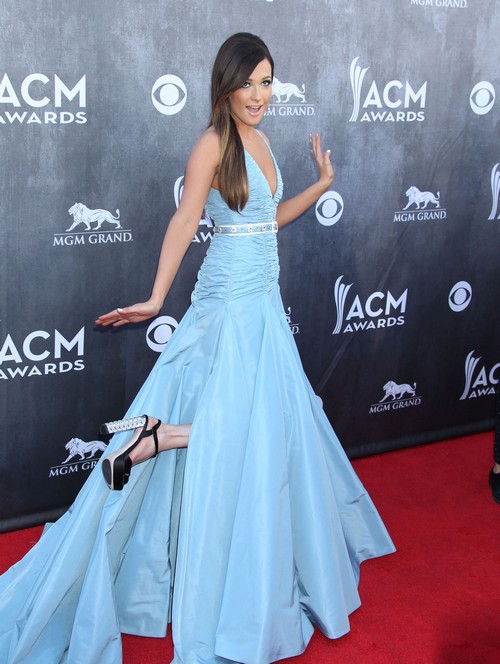 Taylor Swift has gone all these years without anybody dethroning her as the young queen of country music, but that’s all about to come crashing down around her. According to recent reports, Taylor has been seeing red about her new competitor, young country star Kacey Musgraves.

Kacey’s seemingly got it all – looks, talent, and a burgeoning fan base that threatens to overpower Taylor’s own. Plus, Kacey won the Grammy for Best Country Album this year, in a category that Taylor was also nominated in and lost – and we all know what happens when Taylor loses things.

A source tells the National Enquirer, “Taylor is used to having all of the young country stars bowing down before her, but Kacey barely gives her the time of day. Taylor doesn’t like Kacey, and the feeling is certainly mutual.”

Basically, Taylor is jealous that Kacey is popular, pretty, and talented – and has a much more outgoing and outspoken personality than her, which means that she’ll continue to dominate the headlines. It’s true that Taylor’s been lucky all these years, and she’s definitely worked hard to stay at the top, but everyone’s reign comes to an end eventually, right?

We don’t know if Kacey’ll be the one to take over from Taylor, especially in terms of popularity, but can you blame Taylor for being worried? Plus, there’s the rumor about Kacey becoming BFFs with Katy Perry, and if that’s the case, Kacey’s also about to start partying with the elite A-list in the music industry – and by extension, she’ll be seeing Taylor at all these Hollywood parties. Taylor better get used to seeing her around, even if the two are unofficially feuding over the title of country music’s hottest young star.