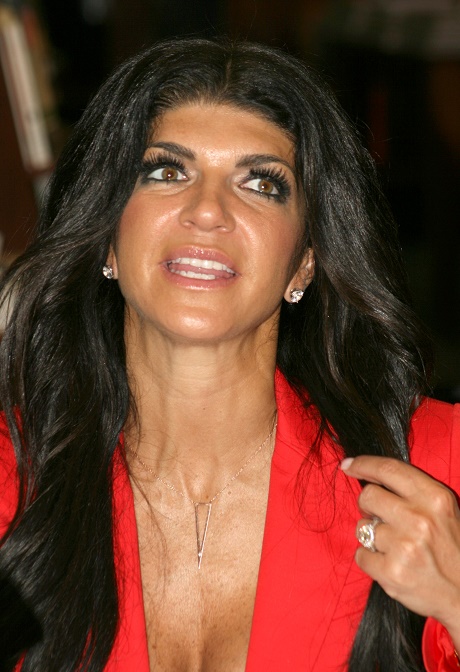 Real Housewives of New Jersey spoilers reveal that the upcoming season of the Bravo series will showcase Teresa and Joe Giudice’s court case. For those of you who haven’t been following Teresa Giudice’s news, she is expected to be fired from RHONJ after she plead guilty to four counts of fraud when she and her hubby were indicted for scamming banks and making fraudulent claims on their taxes. Teresa Guidice’s marriage is in deep trouble and divorce is likely while Joe does his long jail sentence – meanwhile the chances are that she will be fired by Bravo after her sentencing. Teresa and her husband stole millions of dollars from everyone they could including the government. Teresa is not the type of person that Bravo wants to celebrate, is she. In fact one of the only ways that Teresa won’t get fired is if she does divorce Juicy Joe. More drama always helps…. Teresa has been hopeful that she will receive a house arrest sentence, and is confident that she and her family will get through this ordeal just fine. But recent reports reveal that Teresa’s court case is much more serious than she is letting on, and the Bravo housewife is in complete denial.

According to the September 15th edition of OK! Magazine, “An examination of her plea agreement reveals Teresa could be staring down a whopping 35 years in prison when she is sentenced on September 23rd. On top of that hefty maximum sentence, says Florida criminal lawyer and former US Attorney Chris Mancini, Teresa could be on the hook for $1 Million in fines.” Mancini went on to explain to OK! that, “This is a very tough plea agreement, and I think the judge is going to go hard on her. She’ll probably receive a substantial sentence.”

So, what is a wife and mother on the verge of spending several years in prison to do? Well, if you are Teresa Giudice, you live in complete denial and spend your final free days shooting a reality TV show, partying with your friends, and hanging out on the beach. A source close to the reality TV star revealed to OK! that, “Teresa is still in denial and as arrogant as her husband. She’s been posing on the beach in a bikini when she could be headed to prison.”

Unfortunately, we have to wait until September 23rd when Teresa is officially sentenced to see how many years she will be spending in prison. Do you think that the judge will go easy on her, or she will actually end up doing some serious prison time? Let us know what you think in the comments below!