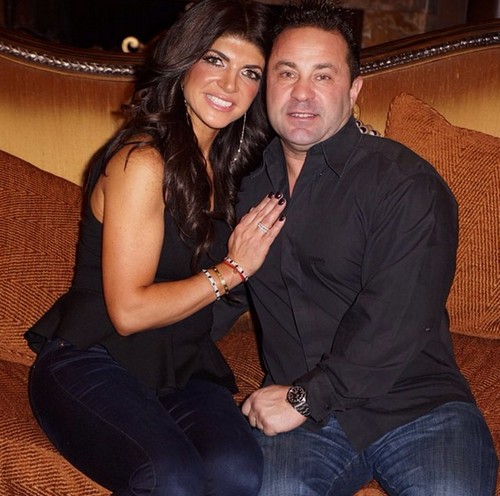 Teresa Giudice is in serious trouble no matter the angle from which you view her situation. Rumors and reports have the RHONJ star, pregnant, fired, getting house arrest and even a divorce! Real Housewives of New Jersey spoilers tease that on October 2 a judge will finally decide Teresa Giudice and her husband Joe Giudice’s fate, and we will finally know whether the fraudulent couple is going away to prison. The Giudices’ felony fraud charges are much more severe than they are letting on, and the truth of the matter is, both of them could go to prison for up to thirty-five years and Joe Giudice could even be deported back to Italy, Teresa is praying for house arrest.

On top of Teresa Giudice’s mounting legal problems, the one legitimate income she has from appearing on the Bravo reality TV series Real Housewives of New Jersey is in serious jeopardy and rumor is she is being fired. Despite all the buzz from Teresa’s trial, the RHONJ ratings are sinking faster than the Titanic, and Bravo is blaming Teresa. Not only is Teresa not promoting the show like she used to, but fans are so disgusted with her and Joe’s court case that they don’t even want to watch them on Real Housewives, the Giudices’ scandalous legal case is actually hurting ratings more than it is helping them.

Rumors are running rampant that Teresa Giudice and hubby Joe will be divorced as soon as they are sentenced, and a few sources closed to the Giudice Family have confirmed that a divorce is most likely in the cards. Teresa blames Joe for her legal woes, and wants nothing to do with him, the lawyers have encouraged them to keep a united front until the case is over. But, as soon as they are sentenced, Teresa is filing for divorce.

What is point of getting a divorce if you are in separate prisons anyways? Well, as far as Teresa is concerned, she’s not going to prison. And, new reports from In Touch reveal that the reason Teresa is confident that she won’t be doing jail time is because she is pregnant with baby number five and her lawyer is using that to push for a lighter sentence, like house arrest. There is a chance that Teresa Giudice could come out of this entire scandal smelling like roses. Her husband Joe will serve time for basically both of their crimes, she will divorce him and be rid of him as soon as he is sentenced, and she will create the perfect storyline on Real Housewives of New Jersey, “Teresa Giudice A Victim, Pregnant And Alone, Trapped Inside All Day Under House Arrest.”

What do you think RHONJ fans? Is Teresa Giudice going to jail, or will she worm her way out of it? Do you think she is really pregnant and divorcing Joe? Let us know what you think in the comments below and don’t forget to check CDL for all of your Real Housewives of New Jersey spoilers and recaps.