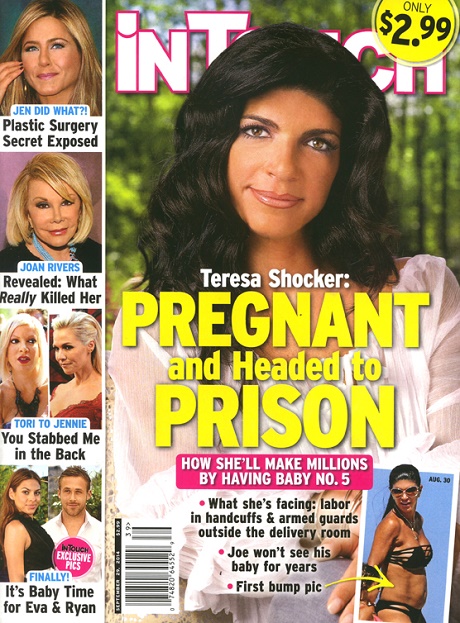 On October 2nd Real Housewives of New Jersey’s Teresa Giudice and her hubby Joe Giudice will be sentenced for the fraud charges they plead guilty to earlier this year. According to several sources, Teresa is facing a maximum of thirty-five years in prison, and her husband Joe could possibly be deported back to Italy; however, the delusional reality TV star is living in a fantasy land and confident she is not going to prison. And, the cover of the September 29th edition of In Touch finally sheds some light on why Teresa is so confident she will get a light sentence of house arrest.

We may have all seriously underestimated Teresa Giudice, because she has pulled the oldest trick in the book when it comes to avoiding jail time. The cover of In Touch magazine reveals that Teresa Giudice is pregnant with her fifth child! The cover of this week’s issue of In Touch reads, “Teresa Shocker: pregnant And Head To Prison. How She’ll Make Millions By Having Baby Number Five.” The cover goes on to reveal how horrific it will be for Giudice to be pregnant in prison, and that she will have to endure labor in handcuffs.

The odds of Teresa actually giving birth to baby number five in prison are pretty slim. Everyone has been reporting for months now that Teresa is delusional about the severity of her charges and positive she isn’t going to prison. What if she isn’t as delusional as we all thought? Perhaps the reason she is so confident she isn’t going to jail is because her lawyer is already working on a special deal with the courts so that Teresa can avoid prison time because she is pregnant?

The cover of In Touch also features a picture of Teresa Giudice in a bikini with a possible baby bump. (Then again the woman has had four children so their baby bump could just be what someone’s stomach looks like after carrying four babies in it.) Do you think that Teresa Giudice is really pregnant? Will her baby bump save her from jail time? Let us know what you think in the comments below!