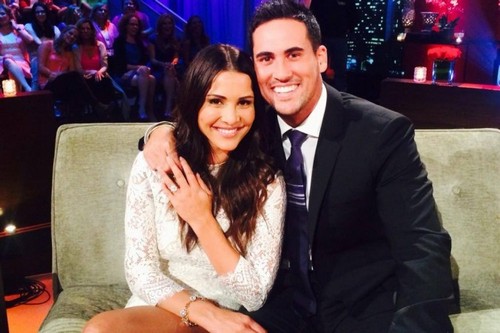 Season 10 of The Bachelorette 2014 is officially over, Josh Murray and Andi Dorfman are reportedly planning their extravagant TV wedding. But, runner up Nick Viall is not happy about it. When Bachelorette spoilers teased that Josh Murray would be the winner of the season, fans were skeptical seeing as how Nick Viall was considered the front-runner the entire season. Bachelorette fans, and Nick Viall, thought he had the competition in the bag. So, you can imagine all of our shock and Nick’s shock, when Andi gave her final rose to Josh Murray.

During the After The Final Rose show Nick Viall dropped a bomb on Bachelorette fans… and Josh Murray. While he was on stage with Andi for the first time since she dumped him, he announced that Andi “made love to him” during their Fantasy Suite date. Considering the fact that Andi accepted Josh’s proposal just a few days later, the fact that she slept with Nick could definitely be considered cheating. And, Josh Murray is not happy about it.

Josh played the role of “TV husband” perfectly when he took the stage during the ATFR show, and he gushed about how in love he was with Andi and pretended he didn’t care that Nick Viall told the world he had sex with his bride to be. But, according to insiders, all hell broke loose after Andi and Josh left the stage. Josh is livid that Andi had sex with Nick Viall while they were filming The Bachelorette. Considering what we have learned about Josh since his stint on The Bachelorette, it’s not even about the cheating, it’s his pride that is hurt. Multiple sources have reported that Josh Murray is very controlling and territorial when it comes to the women in his life, and Andi made a mockery of him on live television.

What do you think about the bomb that Nick Viall dropped on The Bachelorette’s After The Final Rose show? Do you think that the rumors are true and Andi and Josh’s wedding is on hold now that Josh knows she had sex with Nick Viall? Let us know what you think in the comments below!