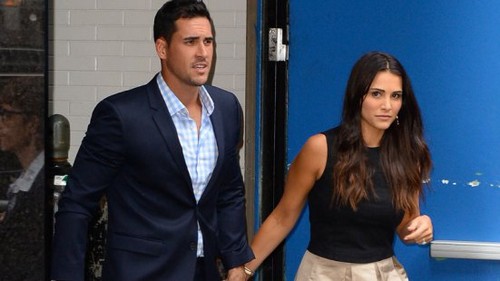 The Bachelorette 2014 Season 10 finale was rather predictable this summer, Bachelorette spoilers teased months in advance that Andi Dorfman would give her final rose to Josh Murray and send Nick Viall home broken-hearted, and that is exactly what happened. It was during the live After The Final Rose show that the sparks truly began to fly. Nick Viall took the stage with Andi Dorfman and bitterly informed her that if she wasn’t in love with him, she shouldn’t have made love to him.

Bachelorette fans were obviously shocked by Nick’s statement, seeing as how Andi is now happily (or anyways pretending to be) engaged to Josh Murray. Everyone at home knows what really happens on Fantasy Suite Dates, but it’s not too often that the members of the Bachelor or Bachelorette admit to having sex in the Fantasy Suite afterwards. And, Andi was as shocked as we were by Nick’s statement, and she became flustered and accused him that his statement was “below the belt,” no pun intended.

A few moments later Josh Murray joined his new fiancée on stage and they gushed about how happy they are and how in love they are, and never once mentioned the fact that Nick Viall just revealed Andi cheated on Josh just hours before she accepted his proposal. And, the reality TV Emmy clearly goes to…Andi and Josh. Rumor has it after the ATFR show, Josh was livid that Nick announced to the world he slept with his fiancée. It’s a no-brainer that Josh Murray is a proud man, and according to Life & Style Magazine, he’s a bit on the controlling side too. So, we can only imagine the choice words he had for Andi once they were off The Bachelorette stage.

Although the couple bragged to Chris Harrison that they are planning their extravagant TV wedding, rumor has it the wedding is actually on hold after Nick Viall revealed he had sex with Andi Dorfman. What do you think Bachelorette fans? Do you think Andi and Josh will be able to overcome this bump in the road and still say their “I Do’s”? Or is Josh too jealous to forgive Andi for having sex with Nick Viall? Let us know what you think in the comments below!