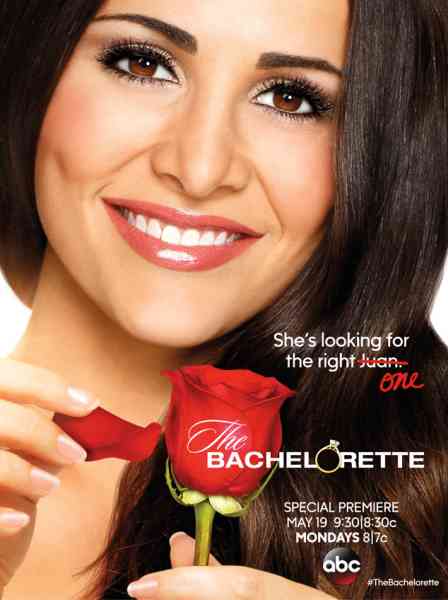 The first official promotional poster has been released for Andi’s season of The Bachelorette, and the producers managed to slip in a little Juan Pablo diss. The poster is an up-close (and airbrushed) picture of Andi Dorfman holding the iconic red rose. Off to the side of Andi’s picture it says, “She’s looking for the right Juan.” Juan was crossed out with a big red X and someone scribbled “one” over it.

It’s really no surprise that the Bachelor producers are making little subtle jabs at Juan Pablo, they probably will continue to do so for many seasons to come. Juan Pablo made a complete mockery of Chris Harrison during the live After The Final Rose show, and then didn’t show up the next morning for his mandatory appearance on Good Morning America. Since his appearance on The Bachelor Juan Pablo has slammed the franchise during interviews and on social media on more than one occasion.

Andi Dorfman’s season of The Bachelorette will premiere in just four short weeks, will you be tuning in this Spring? Let us know what you think of the promotional poster in the comment section below.

Editor’s Note: And what do you think Nikki Ferrell thinks about this diss from the lawyer, her supposed friend? After all Nikki is making the best of things with her Bachelor catch – besides what makes Andi think that anyone buys her BS anyway? Andi behaves like a total famewhore –  she is on an absurd reality show pretending to look for love when what she is looking for is MONEY and MORE MONEY. As if Andi Dorfman is any better than Juan Pablo! Please, this phony dropped a murder case while it was at trial to be a reality star. So shut up Andi – you are in no position to say anything about Juan.