The Bold and the Beautiful Spoilers Week of November 17: Hope Leaves Amsterdam Furious With Wyatt and In Love With Liam 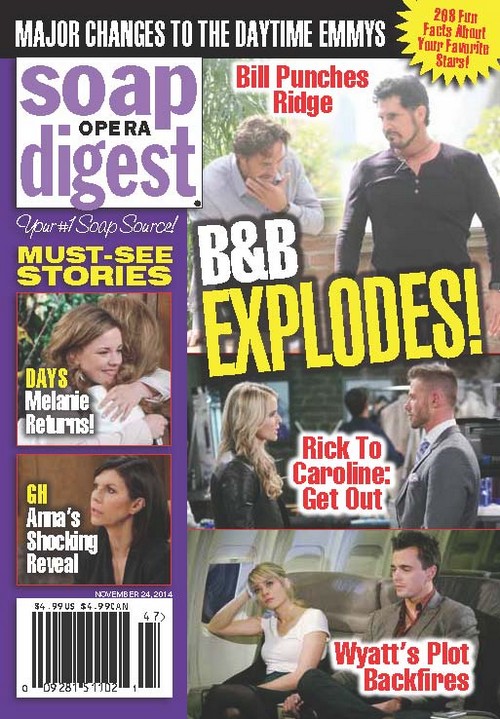 The Bold and the Beautiful spoilers tease another week of drama during November 17-21, and rumor has it B&B fans won’t want to miss a single episode of the CBS soap. Last week Hope, Wyatt, Liam, and Ivy all headed to Amsterdam for a Forrester Creations photo shoot. According to Bold and the Beautiful spoilers, during the week of November 17 their trip takes a turn for the worse. Hope is furious with Wyatt when she learns that he has been doing Quinn’s dirty work and playing matchmaker for Liam and Ivy. Wyatt’s baby-mama is just as furious with herself though when she realizes that she is still in love with Liam, so she announces she is cutting the trip short and heading home.

Back at Forrester Creations, Bold and the Beautiful spoilers tease another week of intense drama. Caroline has been determined to win back Rick, however Rick turns to the bottle to drown his sorrows and it turns out he is a mean drunk, and mean enough to drive Caroline back into Ridge’s arms. Caroline and Ridge don’t help matters any when they announces that since their first collection was such a success, they want to work together again.

Bold and the Beautiful spoilers also tease that fans can expect to see another elaborate Forrester Creations fashion show, but of course it won’t go off without a hitch. Bill Spencer is livid that Ridge not only hurt this baby-mama Katie, but also used his niece Caroline and destroyed her marriage. Naturally, Bill chooses to confront him at the fashion show of all places, and a brawl ensues between the two nemeses.

So B&B fans, do you think that Hope has reason to be upset with Wyatt, she married him and shouldn’t care about Liam – right? Is this the end of Hope and Wyatt? Do you think we have seen the end of Ridge and Caroline, or is their affair just heating up? And what about Ridge and Bill’s brawl? Are you Team Bill or Team Ridge? Let us know what you think in the comments below and don’t forget to check CDL tomorrow for more Bold and the Beautiful spoilers and news.