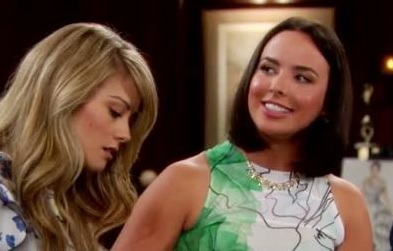 Bold and the Beautiful spoilers tease that it is only a matter of time before Ivy makes her move on Liam Spencer, and it all starts when she invites him to a barbecue. Ivy fills her new BFF Aly in on her plans to win over Liam Spencer, since Hope chose Wyatt over Liam in Paris, Ivy thinks that he is fair game. Of course in any normal world, Liam would be fair game, but in the Logan women’s world they are entitled to stake their claim in more than one man at a time.

According to Bold and the Beautiful spoilers, Hope overhears Ivy and Aly discussing Ivy’s plan to hook up with Liam, and she realizes that there is a new woman in Liam Spencer’s life. Hope is devastated at the thought of Liam being with any other woman, and when she realizes that Ivy is replacing her in Liam’s life, Hope begins questioning her marriage to Wyatt. Apparently it is perfectly okay for Hop to be with another man, by Liam is supposed to spend the rest of his life pining over Hope.

So B&B fans, who do you like Liam with, Ivy Forrester or Hope Logan? Do you think that Hope might become so jealous when she sees Liam with Ivy that she might leave Wyatt and pursue Liam again? Let us know what you think in the comments below and don’t forget to check CDL tomorrow for more Bold and the Beautiful spoilers.