The Bold and the Beautiful Spoilers: Brooke Dumps Bill Over Ridge as Deacon and Quinn Scheme – Hope’s Qualms Over Marrying Wyatt 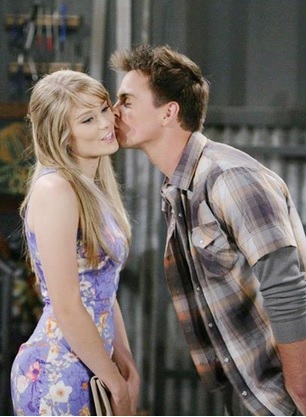 The Bold and the Beautiful spoilers for August 25-29 tease a week of exciting episodes for B&B fans. Now that Brooke knows the truth about Ridge’s designer’s block, Bill finds himself begging for Brooke’s forgiveness all over again. Bill’s saving grace so far has been that Ridge wasn’t injured or seriously affected by his stunt in Abu Dhabi. But, as it turns out having Justin drop Ridge in to the ocean did cause permanent damage. According to Bold and the Beautiful spoilers, the week of August 25 Brooke announces to Bill that their wedding is off… indefinitely.

According to B&B spoilers, Bill apparently can’t take a hint, and still is determined to win Brooke over again. So, Deacon and Quinn continue to scheme together to keep Brooke and Bill apart. When Quinn isn’t working with her partner in crime, spoilers tease that she gives Wyatt an unexpected wedding gift on August 27th.

Wyatt has to threaten his mother Quinn once again to stay away from his bride and brother. According to B&B spoilers Wyatt find himself working double-time to convince his confused bride Hope that she made the right decision marrying him after she learns that Liam was in Paris and didn’t ditch her at the Eiffel Tower. According to Bold and the Beautiful spoilers, an unexpected wedding gift finally convinces her that Wyatt is the man for her.

Bold and the Beautiful spoilers also tease some upcoming drama for Maya and Rick. Even though Rick made it clear that he is happy with his wife Caroline at Hope and Wyatt’s party, Maya isn’t ready to give up on what they had or could have had, and she continues to pursue him. Meanwhile, Maya’s heartbroken ex-fiance Carter slips in to a depression.

So B&B fans, do you think that Brooke made the right decision dumping Bill…again? Do you think they will wind up back together, or she will hook up with Deacon? And, how long do you think Hope and Wyatt’s marriage will last? Do you see her going back to Liam? Share your thoughts and theories in the comments below and don’t forget to check CDL tomorrow for more Bold and the Beautiful spoilers.