The Bold and the Beautiful Spoilers: Liam Stands By While Wyatt and Bob Barker Brawl – Special Guest Appearance Video 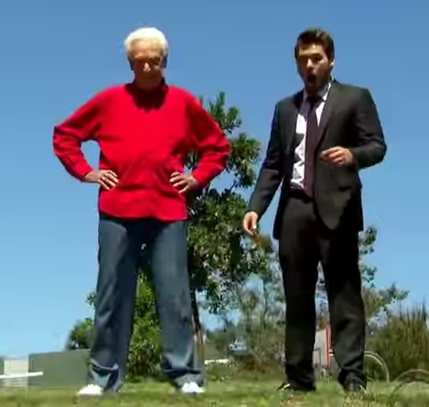 The Bold and the Beautiful spoilers tease that The Price Is Right alum Bob Barker will be making another guest appearance on the CBS soap opera during the week of August 25. It’ not unusual for Barker to show up on B&B, he was just on the soap opera a few months ago when Liam and Hope went to the animal shelter in Los Angeles and adopted a kitten together.

According to Bold and the Beautiful spoilers, Bob Barker is returning to LA just in time for the brother versus brother war over Hope. And, judging from the spoiler video, it’s safe to say Bob Barker is definitely Team Liam. In the promo it appears that Barker is playing homage to his infamously hilarious scene in Happy Gilmore. Liam stands by and watches as Barker proceeds to kick, punch, and head-butt Wyatt, and then throw him down a hill like a ragdoll.

It’s ironic because the last time Bob Barker was on Bold and the Beautiful, Hope had just told Liam and Wyatt that she wanted to date both of them before she decided who she wanted to be with. Since then Hope chose to be with Liam, and then married Wyatt less than a month later. Although there is no news on what Bob Barker and Wyatt are fighting over, we’re assuming it was something to do with the latest developments in the Liam-Hope-Wyatt love triangle.