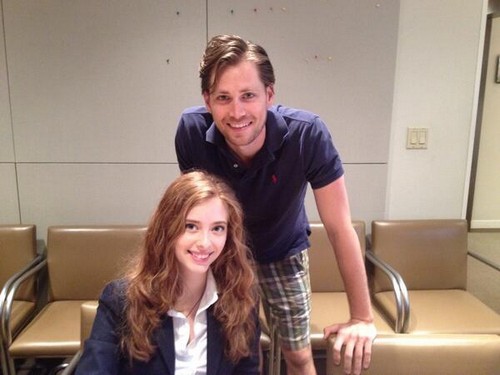 Bill’s girlfriend Brooke’s conscience begins to kick in, and she almost feels guilty about stealing Spencer Publications out from under her sister Katie’s nose. But, just when she is about to call off the scheme Katie rubs her the wrong way by denying Bill the right to see their son Will. Brooke is so furious she ups the ante and charges full force ahead with her plan to kick her sister out of Spencer Publications.

Meanwhile, Ridge Forrester can’t hold in his disapproval any longer and finally voices his opinion about Bill Spencer. Apparently Ridge doesn’t want to be with Brooke, but she isn’t supposed to be with anyone else either.

According to Bold and the Beautiful spoilers the week of April 28th-May 2nd will also prove to be an interesting one for Forrester Creations intern Aly Forrester. Oliver puts her in an awkward position when he tells her a huge secret, and makes her swear she won’t tell a soul. Aly winds up telling Caroline the secret anyways and Oliver probably isn’t too happy about it.

Meanwhile her Mom’s killer Taylor is back in town (Hunter Tylo) and pressuring Eric to let her reach out to Aly, and a therapy session with the woman that ran her Mom Darla over on the side of the road is the last thing Aly Forrester needs in her life right now. Can you imagine the showdown we are in store for when Aly and Taylor get together?

The week of April 28th – May 2nd will also feature a guest appearance from Price Is Right alum Bob Barker, he will be sharing an animal shelter scene with Hope and Liam. You know there won’t be any meat on the set when Bob’s around – he is an ardent vegetarian and animal rights activist and financial supporter.

It really is becoming difficult to choose between Katie, Ridge, Brooke, and Bill, in terms of which couple is in the wrong this week. Should Brooke and Bill really be trying to oust her sister and his ex-wife from Spencer Publications? Ridge tried to oust Brooke’s son from the Forrester Creations’ president position, but do two wrongs make a right? And, how does Ridge have a right to pick and choose who Brooke hooks up with when he abandoned her so that he could be with her sister Katie? Clearly he gave up his rights forever when he did that. Are you supporting Ridge and Katie or Brooke and Bill? And what do you think the big secret is that Oliver shares with Aly? And why does Aly betray Oliver? Let us know in the comment section below and don’t forget to check CDL tomorrow for more Bold and the Beautiful spoilers.

Here is a comment from Soap Opera Spy on the relationship triangle between Hope, Liam, and Wyatt:

Great couple actually. That’s all Aly needed to chill out on Hope/Wyatt. Her own man. Now, kill off Liam & all will be well. Bring Steffy back.

As you can see not everyone is a fan of Liam! But what about April 25 developments between Liam and Hope? Well fans on the web have much to say about the romantic dinner Hope and Liam shared:

I cannot believe Hope went to Liam’s house. How is that right?? Make your mind up girl #BoldandBeautiful

If Steffy walked in he would have dropped Hope like a hot potato!

I’m totally done with B & B! Can’t stand Hope with Liam. Don’t care to watch it & I don’t have to. By to you all that don’t mind watching the same storyline year after year.

that was an insult to wyatt

Not that I like wyatt but he did not deserve this

Bring Steffy back. Wyatt needs someone hot as she is if Hope is going to ,ugh, Liam. Steffy is much hotter than Hope can ever dream of being.

It’s true that Liam and Hope better not count out Quinn! You know Wyatt’s mom will be doing some dirty campaigning on behalf of her precious son….

LOL Hope just told Wyatt that she cannot sleep with him anymore and she will be dating both him and his brother, Liam. He realizes he does not have a choice if he wants to keep her.

Hope to Wyatt, “I watched my Mom ping pong men around and I never thought I would be like that but I am in love with 2 men. I promise I won’t drag this out, it won’t take long.”

Those writers are demented! And definitely need stop with wife swap.

I hope that Hope picks the right guy this time and Marry’s him! LIAM!!!!

Why don’t they just form a commune already and be done with it?