The Bold and the Beautiful Spoilers: Eric Makes Brooke and Ridge Co Vice-Presidents – Katie Will Freak Out 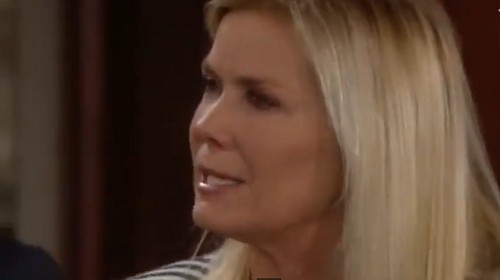 The Bold and the Beautiful fans have been sitting on pins and needles this week waiting to see who Eric Forrester would choose to take on the role of President of Forrester Creations. And, Eric finally announced his decision today, and it was a shocking twist that no one seen coming. Eric’s decisions on the Forrester Creations chain of command could seriously affect quite a few relationships on Bold and the Beautiful.

A few days ago Ridge Forrester called an emergency meeting, he announced he was firing the company’s photographer Oliver and that he would be taking over the CEO position again after a nearly two year long hiatus. Since Ridge stepped down, Rick (Brooke and Eric’s son) has been running the company just fine. Eric Forrester had to make a decision, allow his son Eric to continue his reign as CEO or give the position back to Ridge. Today Eric called a meeting and after everyone argued who over the CEO position he made his decision.

Here’s what Eric Forrester had to say, “Stop it everyone. We all have to work together and we will without acrimony. You have all raised valid points. This is a business decision. Oliver will not be going anywhere, Rick will continue as President. Ridge you will work yourself back up. Ridge I am making you co-Vice President of Forrester Creations with Brooke.“

Not only did Eric slam Ridge and announce he had to “work his way back up” in the company, he is forcing him to work side by side with his ex-fiance Brooke, who he just dumped last month because he fell in love with her sister Katie. Eric’s decision will have a strong effect on Brooke, Ridge, Katie, and Bill. Bill Spencer is currently trying to win back Brooke, it’s going to be a little difficult to do when she is sitting in an office every day with Ridge. And, Katie is already paranoid that Ridge may still have feelings for Brooke. If Katie is correct, then there is a good chance those feelings could go stronger if they are working side by side every day at Forrester Creations. Katie is absolutely going to freak out when she is aprised

So B&B fans, are you surprised that Eric announced Ridge and Brooke would be co-vice presidents of Forrester Creations? Do you think Ridge should have gotten his CEO position back form Rick? And, how do you think Brooke and Ridge’s new work relationship will affect their relationships with Bill and Katie?

A comment from Soap Opera Spy sums up how Katie will feel about Brooke and Ridge working together:

Yikes Katie is not going to be pleased that is certain!

Share your thoughts and theories in the comment section below, and don’t forget to check CDL tomorrow for more Bold and the Beautiful spoilers.