The Bold and the Beautiful Spoilers: Taylor Freaks Out Aly – Talks About Killing Darla Her Mother

BY Amanda Austin on May 12, 2014 | Comments: 6 comments
Related : Soap Opera, Spoiler, Television, The Bold and the Beautiful 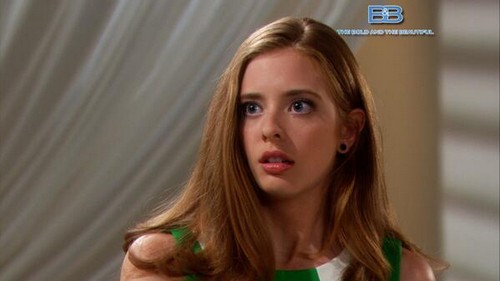 The Bold and the Beautiful writers have cooked up some major drama for fans during the week of May of May 12th-16th, and according to B&B spoilers the week will be packed full of can’t miss episodes. Thorne and Taylor dropped a bomb on Aly, and us, when they revealed they were dating each other and now Taylor will have to answer to Aly.

Bold and the Beautiful spoilers tease an intense showdown between the two women, and the entire night that Darla was murdered will be rehashed, Oliver and Thorne will have to intervene. We have seen how crazy Aly was before Taylor waltzed back into her life, one can only imagine crazy antics we will see during the week of May 12th-16th. Also, rumor has it Oliver will give Thorne a lesson on how to control his own daughter.

The love triangle between half-brothers Liam, Wyatt, and Hope wages on. It shouldn’t come as a shock to any B&B fans that Brooke will encourage Hope to drag out the process and encourage her to enjoy both men for as long as possible, like mother like daughter. Meanwhile Wyatt’s Mom continues to meddle in her son’s relationship and attempts to sway Hope’s decision by setting Liam up.

Bold and the Beautiful spoilers for the week of May 12th-16th also tease that Bill and Ridge may finally face off when Ridge becomes infuriated over the amount of time Bill is spending with his son. Also, Brooke will becomes suspicious of Bill’s relationship with Quinn and Katie will attempt to play the peace-maker between her new fiancé and her ex-hubby. Katie and Ridge will begin planning their wedding, and Brooke and Bill will begin planning their romantic trip to Dubai.

No doubt the Aly-related storylines are the most intense – and some fans on Soap Opera Spy agree.

Yes, move on. Hope/Wyatt/Liam so old news. Let her pick & let’s move totally on. Maybe Hope should go, then we wouldn’t have to do her love interest anymore & that constant look on her face. So done!

So agree it is like a merry-go-round with her.

B&B is getting more and more interesting.

I am finding it a bit slow but am glad they are moving on with this new story.

Well there will be plenty of Aly this week – these really losing it!