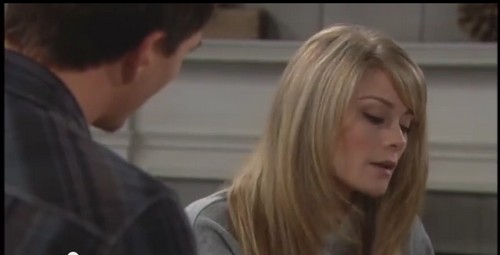 The Bold and the Beautiful spoilers tease that the CBS soap takes an emotional and dark turn on Thursday December 11. Hope made it pretty clear to Liam Spencer that the only reason she was going to stay married to Wyatt was because she was pregnant with his baby – and just like Bold and the beautiful rumors were teasing, now that the baby is gone, so is Hope and Wyatt’s marriage. According to Bold and the Beautiful spoilers for Thursday’s episode of the CBS soap, Hope is dumping her hubby Wyatt.

The Bold and the Beautiful spoiler video for December 11 shows a distraught Hope Logan informing Wyatt that it is HIS (no, that’s not a typo) fault that she fell down the stairs and lost the baby because he didn’t keep Quinn away from her. And, if Quinn hadn’t talked to Hope that day – she never would have been walking down the stairs. Yeah, we’re still trying to wrap our minds around her logic too. Then Hope adds, “We both know the only reason we’re married is because your mother engineered it.” Wyatt apparently has had about enough of Hope’s victim role and in the spoiler video he snaps at his soon-to-be ex-wife, “You always want what you can’t have!”

In other Bold and the Beautiful news, while Hope is busy dumping Wyatt, spoilers tease that Liam pays Quinn Fuller a visit to deal with her. What is really ironic is – wasn’t Liam the one that implied Hope should “get rid of” the baby since it wasn’t his? Call me crazy, but hasn’t everything worked out exactly the way Liam wanted it to? Anyways, in the all new spoiler video for December 11, Quinn pleads with Liam and reminds him that the baby Hope lost was her family too. Liam doesn’t want to hear it though and retorts, “They’re not going to forget that you’re the reason that baby won’t be born.”

So B&B fans, there are some pretty heated and riled up viewers right now. How many of you think that Hope and Liam are being ridiculous for blaming Quinn – when Quinn didn’t touch her? Or do you truly think it is Quinn’s fault Hope tripped and fell down stairs all by herself? Do you think Hope is going too far blaming Wyatt for losing the baby because he didn’t “keep his mother away from her?” Let us know what you think in the comments below and don’t forget to check CDL tomorrow for more Bold and the Beautiful spoilers and news.