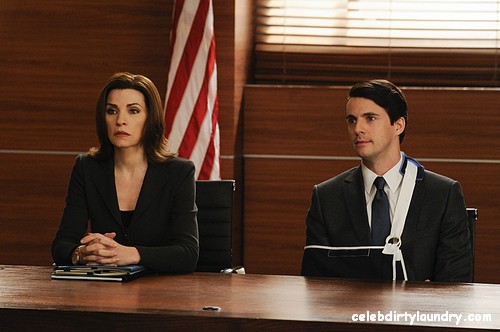 The Good Wife returned tonight to CBS with another great episode.  I cannot wait till the next episode.  To wet your appetite we have a sneak peek video and some insight for you below on what is going to happen on the next episode called, “All Tapped Out.”

On tonight’s episode Jason O’Mara guest starred as Lockhart/Gardner Lawyer Damian Boyle.  Alicia and Diane considered merging their firms in the wake of Will’s death, even as they found themselves on opposite sides of a contentious divorce suit. Meanwhile, Alicia offered assistance to Finn when it became clear that the State’s Attorney was looking for a scapegoat in the Jeffrey Grant case.  More happened!  If you missed the episode we have a full and detailed recap, right here for you.

Spoiler alert: If you’re one of those people who doesn’t like spoilers, stop reading now! We have some juicy spoilers for you about the season 3 episode 18 of CBS’s “All Tapped Out.”

CBS’s Official Synopsis: “Florrick/Agos takes on the case of an NSA whistleblower, only to learn that the agency has been monitoring the firm as well as Alicia’s personal life. Meanwhile, Diane faces the difficult task of working alongside Louis Canning when he joins Lockhart/Gardner. Also, Alicia goes after the State’s Attorney when he attempts to make Finn a scapegoat in the Jeffrey Grant case.”

On next week’s episode an NSA whistleblower leads Florrick/Agos to the source of leaks coming from the firm.  Michael J. Fox Returns as Louis Canning.  The episode was written by Matthew Montoya and Julia Wolfe.

The Good Wife Season 5, Episode 18 “All Tapped Out” airs on CBS on April 20th, 2013. Check out the preview video & some photos from episode 18 below and let us know in the comments below what you think!