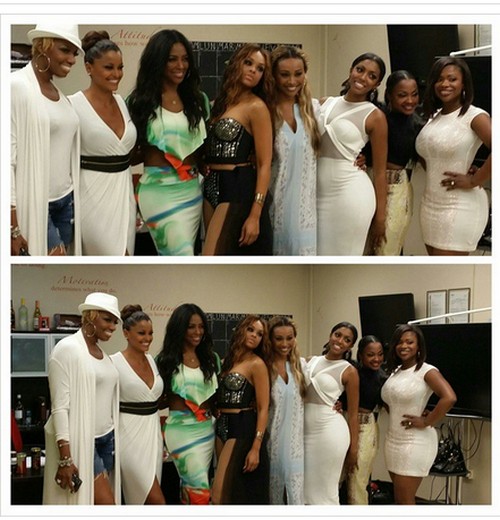 Several new cast members have been introduced for the Season 7 of The Real Housewives of Atlanta, and they all made an appearance for newcomer Demetria McKinney‘s birthday in Puerto Rico.

Demetria McKinney and Claudia Jordan have both signed for Season 7 of RHOA, with options for their roles getting expanded in future seasons. Right now, Demetria is a ‘full-time’ housewife, whereas Claudia has more of a supporting role.

This is the first time the new cast for RHOA has been photographed together at the same time, including both new cast members and old cast members. Demetria uploaded photos of the whole gang together on Friday, captioning the photo, “#ILoveMyLife! Performed #100 and celebrated my birthday in style and beauty with these ladies! Xoxo.”

In other words, this is just the calm before the storm. The feuds on RHOA have already gained a lot of attention during the previous seasons, especially between NeNe Leakes, Kenya Moore, and Porsha Williams. There have been physical fights, hair pulling, name calling, and every insult lobbed at each other in full view of cameras and their fellow cast members. But apparently, both Claudia and Demetria have been brought on to ‘support’ Kenya, who has become unpopular with the other cast members recently. Of course, with the new additions, we can probably expect a lot more drama to ensue. They seem to have pretty strong personalities, and that’s always an explosive ingredient on the show.