The Walking Dead Season 5 Spoilers & Discussion: Romance To Flourish Between Carol And Daryl – Or Is He Gay? 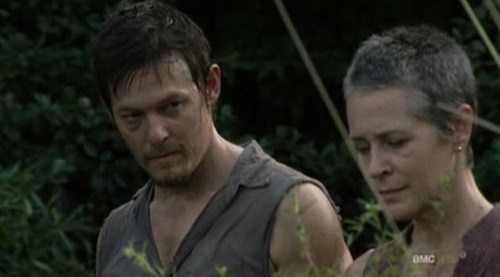 There have been rumors of a romance forming during The Walking Dead season 5, but those connected with the show are staying mum on the details. We’ve watched Carol and Daryl grow closer together since season two, but what’s really up with those two? Romance? The romance rumors have stirred up talk about a possible pairing between Daryl and Beth. Although Beth’s fate is still unknown, it’s hard to imagine the two of them together. Beth is very young on the show and that would not be logical at all.

Carol is the one who seems to have developed a true bond with Daryl. That friendship started in season two when Daryl tirelessly searched for Carol’s missing daughter, Sophia. It was to Carol that tough guy Daryl first began to show tenderness toward.

Remember when he gave her the Cherokee Rose? How about when he thought she was dead and he placed another Cherokee Rose on her grave? Daryl was the one who found Carol in the prison after T-Dog sacrificed himself to save her.

We have watched as the two seemed to grow closer together. Now, Carol has come to Daryl’s rescue and we all cheered as Daryl ran to her, tears streaming, holding her tight, and even lifting her off the ground in his joy at seeing her.

There’s something there, let me tell ya.

Gay Rumors – Okay, we’ve all read the recent rumors that Daryl may be gay. Some rumors point to Daryl’s seemingly non-sexual interest in any woman being a hint that he is in fact gay. Is there something to that? Daryl has long been a loner who keeps to himself and reveals little. We probably know less about Daryl than any other character on the show.

Perhaps Daryl was simply grieving for and missing Carol? A Closed Personality – Daryl doesn’t seem to be a flirt or a perv, so I cant see him making dirty comments to the gals. That’s not his personality. That was his brother’s personality. Daryl keeps things close to his chest, so to speak. Daryl doesn’t strike me as the type of person who is quick to let you know what he’s thinking or let someone see what he really knows or believes. He keeps himself closed off and reserved.

Keep watching. I predict we will see a lot more between Carol and Daryl in season five. Be sure to check out CDL for more The Walking Dead season 5 spoilers and discussions!