The Walking Dead Season 5 Spoilers: Is a Zombie Disguise a Good Idea? Prepare for the Zombie Apocalypse! 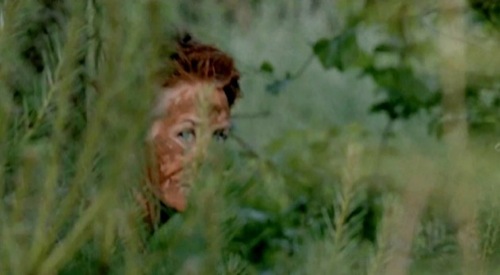 Camouflage: Why did Carol douse herself in zombie blood and guts? The idea was first visited in season one when Rick and Glenn covered themselves in zombie guts in an attempt to disguise their “living” scent and move among the walkers. While Carol was not present during this adventure, it is certain that she heard about it.

So when it’s time to move around amongst the walkers at Terminus, Carol obviously remembered the trick. It worked in season one and used the idea of blending in.

It’s Not Sight, It’s Scent: Walkers apparently don’t rely upon sight alone to lead them to living flesh. It seems as though it is the smell of living flesh — that human smell — that attracts them. They also seem to be attracted by sound and movement, but scent brings about their frenzy.

It Works for Hunters: Deer hunters douse themselves with deer urine to cover up their human scent. Some even go several days without bathing before a hunting trip. The idea is to disguise their scent to either confuse prey or lull them into thinking there is nothing to be concerned about.

This is the same principle that Carol used. While it would have to be a little terrifying to be walking along in the midst of a zombie hoard, Carol was on a mission to save her loved ones.

What Do You Need?: In the season five premiere, Carol threw a poncho of sorts over herself, smeared her face with zombie blood and covered the poncho in blood as well. This seemed to do the trick and the walkers were fooled into thinking she was one of them.

In season one, though, Rick and Glenn got a lot more gory. They draped entrails and other bits of zombie around their neck. It worked, although a rain shower started washing it away while they were in the midst of their zombie shuffle.

Apparently, though, you just need a heaping helping of zombie blood to camouflage yourself. You also need to be careful not to draw attention to yourself, lest there is a zombie nearby who may have some brain power left. If you noticed, Carol walked slowly along with the zombies and was quiet as she worked her way to Terminus.

In the event of a zombie apocalypse, keep this trick in mind. We can only hope it really works, but then again, let’s hope we don’t have to deal with zombies.